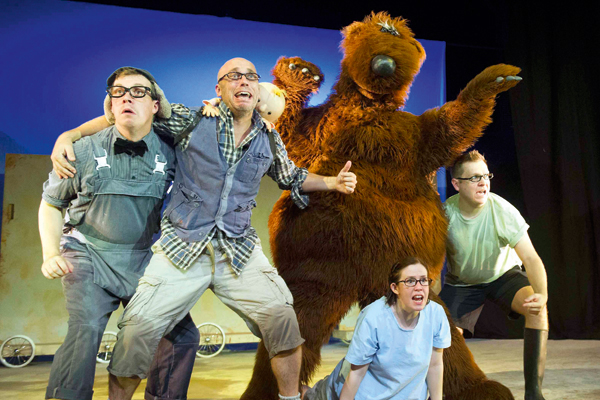 We're Going on a Bear Hunt

Recommended to all bear hunters

The Friday afternoon slot is perfect for the three plus age range. It could possibly entertain a five or six year old but no older – this production is definitely for wee ones. The simplicity, music and repetition all appeals to under-fives, with lots of clapping and singing along. The actors playing the starring family and dog arrive by running through the audience, causing much excitement, and there is plenty of audience interaction throughout. At one point the audience is sprayed with water pistols, which is met with squeals of delight.

In an inspired piece of staging, the family dog plays a lot of the music live on stage and it is commendable that while the main chant is repeated throughout the show there are many different musical styles on display, even a finger-clicking jazz number.

In another nice touch, the acts are performed with the theatre lights on for the louder, more interactive scenes, with the lights down for more atmospheric, quieter parts. This gives contrast and keeps little people entertained but relatively calm, no doubt a relief to bigger audience members.

The only aspect left wanting is the stage design. For half the show there are three large boards with wheels (representing a train?) which sit in front of a background of murky splodges of paint (grey sky?) It’s ugly, uninspiring and by far the least dynamic part of the production.

Luckily the actors, where all our eyes are, are very good. They are a tight little team and keep the material engaging, even when it seems like Rosen’s slim picture book is not inspiration enough for an hour’s worth of children’s theatre.

Typical then that they should be overshadowed by a two minute cameo, as a large fluffy creature comes out and shuffles around mutely for two minutes to audience rapture. This is of course the rather cute, and not so scary, bear and the star of this afternoon’s show. He will be treading boards nightly as part of a UK wide tour –  recommended to all bear hunters, both little and large.