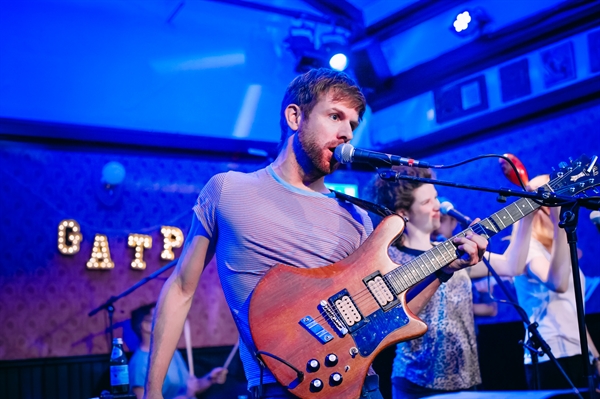 [rating: 3/5] An energetic mash-up of gentle comedy and infectious indie-pop that is an unashamedly good-natured night out.

Alone, Scottish newcomers Golden Arm boast an enjoyably quirky line of upbeat indie tunes: think Pulp channelled via Brandon Flowers. With the Golden Arm Theatre Project however, they’ve upped their game with the accompaniment of the energetic theatre ensemble Blood Of The Young, whose interjection of short, slick new plays inspired by the band’s songs rounds out a witty showcase of up-and-coming talent that cheerfully chucks theatre etiquette out the window.

A personable trio at the best of times, with the addition of Blood Of The Youngsters Kim Allan, David James Kirkwood and Isobel McArthur, Golden Arm’s small, packed stage in the corner of the Trav’s bar threatens almost overwhelming amounts of pep. Veering mostly towards gentle comedy, the four short plays are performed with energetic commitment by the small company who are given space to show-off their considerable comedy skills via Paul Brotherstone’s tight, unshowy direction. Standout among the written pieces, Clare Duffy’s Barcelona is a sensitive comedic vignette excellently performed by Kirkwood.

At close to two hours, the format is just beginning to get repetitive as the set comes to an end. A little more tonal variety in the plays and the songs might see this off and in this respect, Isobel McArthur’s ponderously hilarious internal monologues – performed by her and Kirkwood over the band re-tuning – are perfectly pitched to inject some welcome self-referential irony into the programme.

But perhaps the nicest thing about this evening is the total lack of pretension. The packed bar and constant comings-and-goings create an evening of music and theatre that’s wholly accessible, yet with enough production and performing talent to diffuse the drama-class improv feel.

Drag a few friends along, theatre people or not, and they’re going to have a laugh. It’s a breath of theatrical fresh-air. The Golden Arm Theatre Project is a bite-size showcase of fresh, sizzling talent and unashamed good humour. Take note Traverse: a monthly slot would definitely not go amiss.