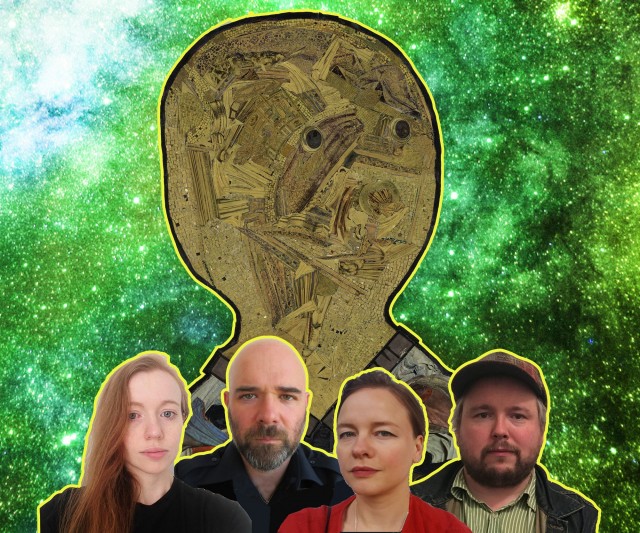 by
Lorna Irvine
26 January 2019
Part of the appeal of Hen Ogledd is that their sound is restless and hard to place. They describe themselves, possibly not entirely seriously, as “world music”, but equally, “pagan funk”, “wonky alt” or “neo-prog” may fit the description more appositely.
Labels then, don’t really apply, but rather, liminal spaces. They are at once atavistic; and forward facing. Tonight, playing songs from third album Mogic (their first as a quartet) they deploy the motherboard of tricks. This includes FX pedals, vocoders and backwards synths.
Synth players Dawn Bothwell and Sally Pilkington’s voices are looped into lunacy during their almost-tribute electro romp to problematic Burns, an Edwin Morgan poem Ode to the Loch Ness Monster; there’s Moog madness throughout, and wonderfully, even the unique phenomenon of harp shredding from Rhodri Davies on Dyma Fy Robot.
First Date is a perverse thing of loveliness: it seems like an 80s-infused pop song about the possibility of desire, but scratch underneath, and it could be a paean to internet stalking.
Such are the paradoxes that lurk within Hen Ogledd: they are wide-eyed and optimistic, full of humane, high concept mischief (the helium squelch of Tiny Witch Hunter, Dawson’s famous falsetto, the head pieces) and turning their collective gaze ever skywards, but they know we’re ultimately doomed. And that’s why they are so beautiful.