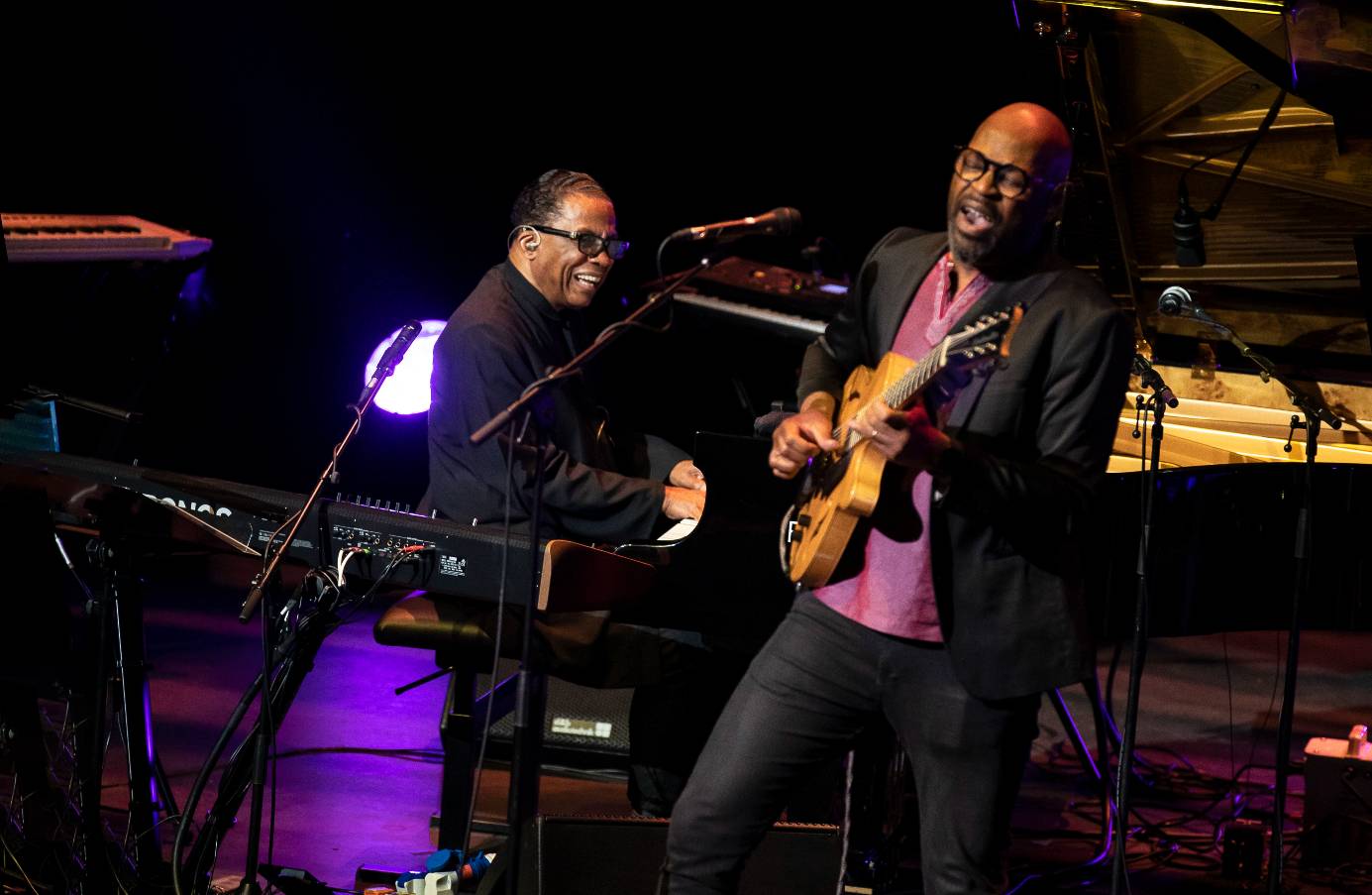 Promises to take us to intergalactic heights. Does so.

An icon whose fascination with the form is undimmed

“Tonight we’re going to look through that telescope.” In his intro, Herbie Hancock makes big claims for what we’re about to hear, comparing it to the astronomical wonders being discovered by NASA’s new James Webb contraption. But when you’re a living legend whose career has spanned jazz, funk and electro and broken new ground in all of them, you can say those kind of things and not seem ridiculous. And, crucially, you can actually pull it off.

Swivelling from piano to Korg, the 82 year old Hancock is professorial at the keys, peering through his glasses at his instruments like he’s tinkering in a lab. Meanwhile, his first rank sidemen, Lionel Loueke (guitar) and James Genus (five-string bass) seem drugged by their instruments, utterly absorbed in their playing and sometimes gurning the same faces in sync as if manipulated by the professor himself. Smiles are flashed cross stage. Someone’s slipped in something clever or unpredictable. We know not what, but they do. They’re a band at ease with themselves and in love with each other’s work.

The biggest smile is saved for Loueke. Hancock beams at his guitarist scat singing to a snatch of Rockit, whilst making a sound a guitar shouldn’t make. “I don’t know how he does it,” Hancock admits. “He sings in one tempo, plays the guitar in another.” Loueke’s bright red sneakers accentuate every flick the boxes of tricks in front of him. At points they make his guitar more like a piano than Hancock’s actual piano.

After a 25 minute overture, with snatches of many old favourites, and an excursion into Wayne Shorter‘s Footprints, Actual Proof is the first chance for the band to really flex their soloing muscles. It’s here we first see what drummer Justin Tyson is capable of and why he’s been a go-to for the likes of Robert Glasper and Kamasi Washington. His solo cartwheels around his kit, and like Loueke, encompasses sounds that shouldn’t emanate from the instrument in front of him. Hancock colours it with stabs of keyboard so it’s not an exercise in dry virtuosity.

Each of them bring something unique to the party. In a mellow moment quite unlike the rest of the set, bassist Genus takes to the loop pedal, creating a sound that’s less jazz than one of Vini Reilly’s dreamy, melancholy indie soundscapes. There was a time 10-15 years ago, when every ten-a-penny wannabe thought a loop pedal made them some kind of creative genius, theatrically signalling what they’re doing. This isn’t that. It’s next order and subtly, masterfully done.

Then, in a moment of exquisite jazz cheese, Hancock brings it back round, whips out the massive shiny keytar and uses it to bring us home through a finale of Cantaloupe Island and Chameleon.

Three younger musicians at the top of their game, led by an icon whose fascination with the form is undimmed. There are a small number of walkouts, so it’s not meeting everyone’s expectations, but it’s not clear why. The standing ovation from those that stay is inevitable, the dancing in the aisles a bonus, and the looks on the band’s faces an indication they’ve genuinely enjoyed this one. Loueke’s “we’re not worthy” gesture to his boss doesn’t seem forced.

The EIF’s contemporary music strand can often feel ho-hum, an assortment of credible-enough touring bands of the kind that come to Scotland any month. Tonight feels different – a marquee event truly befitting of this 75th anniversary year.