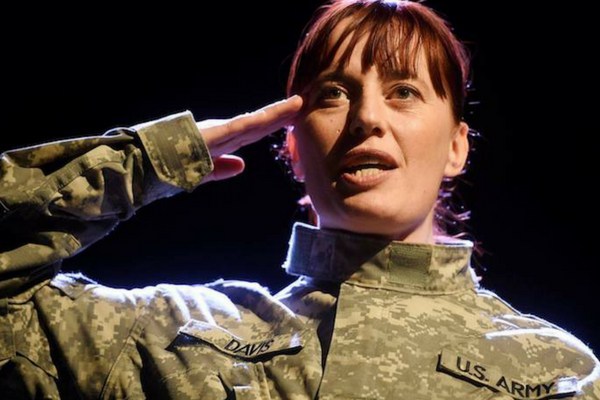 Military biographical let down by poor pacing and an unconvincing performance

Most audiences won’t be familiar with Danna Davis. Fighting in the US army, hers is a story that is remarkable and harrowing in places, after being sexually abused, losing her lover, and coping with the aftermath and continuing to survive. Mary Jane Wells gives this solo performance in a wheelchair, on account of an accident occurring earlier in the show’s run.

Naturally, this restricts Wells’ performance slightly, but she doesn’t let it hold her back and expresses herself enough through her expressions, gesture and delivery. She performs multiple characters fluidly and infuses them with personality, including her traditional Southern mother and a condescendingly cosy Irish therapist. There are elements to her performance that indicate her talent and experience, but put them all together and a problem arises. The creative choices of her performance, potentially influenced by Susan Worsfold’s direction, begin to feel artificial, with lines delivered so over-dramatically that they dilute the believability of the performance. The occasional dark comedy never blends comfortably with the dramatic tone of the rest of the show, acting as a jarring interlude between chapters of her life. Crucially throughout the performance, it is always clear that Wells is acting. Her performance only ever gives the impression that she is telling a story, and never that she has lived it.

This is especially a shame given the beauty of some of the writing in this show. The recurring imagery of swimming with sharks is especially heart-breaking, and the description of Davis’ vengeful fantasies are vividly and mercilessly detailed. Her road to forgiveness is made more meaningful by a script that does not hold back in discussing the darker moments of her life. Even so, some of this writing can be difficult to make out through the frantically rushed direction. When the action is unfolding it becomes near impossible to follow what is happening, let alone be emotionally involved. A plotline that obviously has great emotional weight is never fully explained, or at least is done so without the time it is owed. The sound design also proves a hindrance, often being loud and giving indications of setting that could have been perfectly well explained without the unnecessary noise. Heroine is sadly let down by a production that does not do justice to the bravery of its subject.