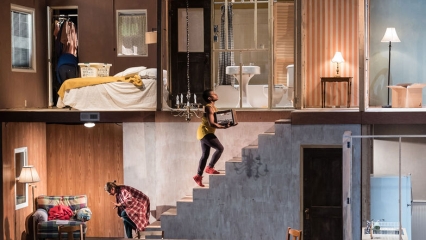 Home, created by Geoff Sobelle, is a staggering feat of illusion, exploring themes of domestic life, family and the concept of houses in the context of a near full-scale building on stage.

Every aspect of the staging, from lighting to props are intricate and innovative. The house is built in front of the audience, from the quiet understated image of Sobelle stapling tarpaulin to a wooden frame to the entire cast hauling toilets and beds up the stairs of the structure. This fully formed set is captivating and the level of detail lends to a sense of realism.

The presence of a live band and Elvis Perkins‘ performance of original songs create a sense of dreamy mystique, complimenting the soft glowing lighting and adding another level of surreal to the already absurd narrative.

The illusions are surprising and playful, from characters disappearing and turning up at the opposite end of the stage to two actors switching places instantly they are used just enough to be compelling without losing impact. The narrative is loose, fluid and repetitive, with the cast carrying out a series of mundane tasks such as cooking and showering, but the overlapping of characters with differing personalities and movements creates identity and enough context to be gripping.

The frenetic movement of several members of the cast as they run through the house contrasted with the slower and calmer presence of Valdes-Aran’s character is stunning and helps to cement their presence as individual characters. The house may be eye catching but it is the performances who fill it and bring it to life.

The audience participation is endearing and unique at first, with random members brought on stage and absorbed into the story. It adds another level to the concept of family and the home as a constantly evolving and changing state.

The use of the audience to enact major life events, from birth to graduation to marriage create a sense of the rapid and surprising way life unfolds. However, as more and more audience members are brought on stage the absurdity and message are lost to chaos. This section also goes on for too long, becoming over-exaggerated and losing the original effectiveness.

It is slightly too organised to be a complete breakdown of traditional theatre and too crowded and messy to be truly effective, but the strangeness and energy brought by the audience adds to the sense of playfulness and is comedic and fresh.