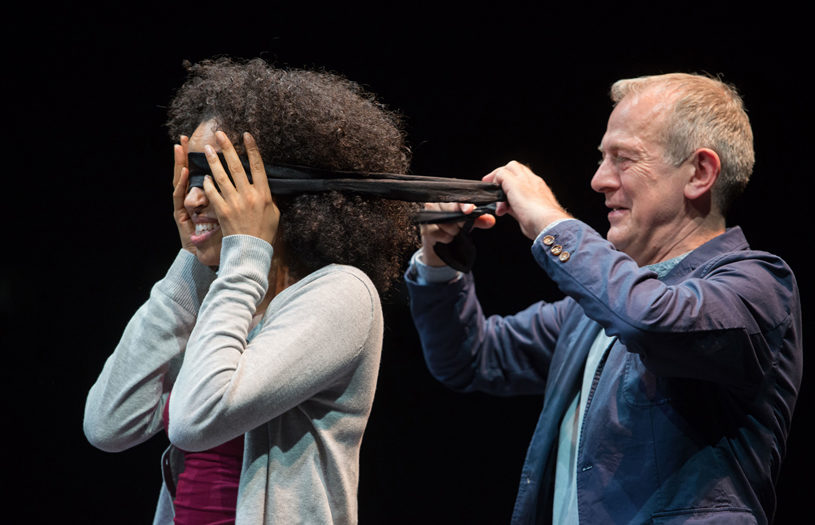 Privilege and colonialism in the rehearsal room in NTS' widely-discussed two hander.

The audience is small, sitting round a thrust stage with three sides to choose from. It’s easy to miss the cast sitting amongst them. Immediately, there is something casual about the whole affair. It doesn’t feel like theatre; it feels like a masterclass.

But don’t use that word, Anthony Nicholl, the great theatre director, hates the word “masterclass”, he prefers words like “journey” or “experience”. Nicholl begins walking around the stage barefoot, a heavy, pretentious air hanging about him. Played by Robert Goodale, Anthony Nicholl is a charming, eccentric, and self-interested tutor, always oozing with a passion for his own voice.

His student, the seemingly nervous Promise, played by Jade Ogugua, shuffles on-stage, uncertain of where to stand or what to do. Nicholl gathers shoes from the crowd and creates a circle on the floor.

“Theatre is dying”, he will proclaim as he guides Promise into the centre of the circle. “This is your circle, your space.” He coaxes Promise to remember a childhood memory and to act it out in her space. The story is ready to head towards its dark and unexpected conclusion. A story screaming against the injustices of colonialism, old and new. A plot that twists around Nicholl’s own self-indulgence and privileged naivety. A cross-fade from the downfall of the master to the revenge of the student.

How to Act builds tension like the skin of a drum. The flashbacks between the masterclass and Promise’s mother in Nigeria seem worlds apart, but as the story carves its way between the two sole characters on stage, everything unravels to a powerful end.

Inspired by Greek tragedies and the director, Graham Eatough’s, own exploration of the West’s relationship with other cultures and communities, How to Act has a lot to say in a short space of time.

“Greek tragedy was a controversial and intensely political form of theatre that had a direct bearing on the communities in which it was presented,” says Eatough.

This National Theatre of Scotland production highlights, in an hour and twenty minutes, the separation of privileges from the west and the rest of the world as, Promise screams, “Your everything depends on us having nothing.”

The masterclass comes to an end. Oil is spilled on the floor, and Nicholl’s past has come for him. But as the audience leaves the stage there is one thought left on their minds: in the future, when we visit another culture or we travel across the world, when we vote for a certain government, or support certain businesses and products, maybe we should consider how to act.