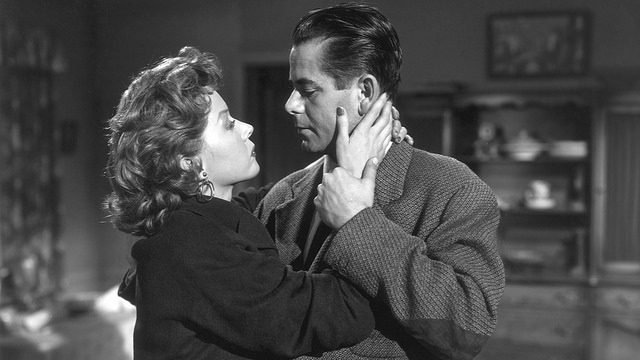 Trains have always been popular in movies but this Fritz Lang noir is about as far from Hitchcock’s cocktails-in-the-Pullman-car as you can get. When strangers on the train Jeff (Glenn Ford) and Vicki (Gloria Grahame) meet there is an instant attraction. He is returning from the Korean war hoping to rebuild his life as a train driver.  She’s escaping a jealous, abusive husband Carl (Broderick Crawford) and hoping to remake her’s.

Jeff and husband both work on the railroad – there’s a real smell of the diesel and axle grease not only in the scenes inthe switching yards, but even the domestic ones. There’s a real documentary feel to much of the movie.

Carl is a nasty piece of goods. In an early scene Grahame receives a slap to the face that looks so un-staged viewers will wince. Her reaction also looks genuine, as if this bit of stage business came as a surprise. Grahame gives a splendid performance as the wife, blackmailed by her own jealous husband, whose mind turns to murder. The actress was stereotyped (flirtatious and insolent in equal measure) in a succession of “bruised fruit” roles.

And the script is pretty fruity too (for its time). Vicki complains to Jeff of Carl: “He’s done things to me I can’t even talk about.” At one point she says: “I couldn’t sleep.” Jeff replies: “There’s more to life than sleeping.”

This is a great, gritty noir and although not a patch on Lang’s The Big Heat (made a year earlier and also featuring Ford and Grahame) it has some good twists. There’s lots of ambivalence in the plot, with the main characters forever skulking about in the shadows. None of the leads is really a good guy and yet they win the audience’s sympathies from the beginning. There’s a fine score (Daniele Amfitheatrof) and Lang brings his European sensibility to a quintessentially hardscrabble American setting (although don’t take the “based on a story by Emile Zola” too seriously). There’s a sense of real people in impossible circumstances forced to do bad things.