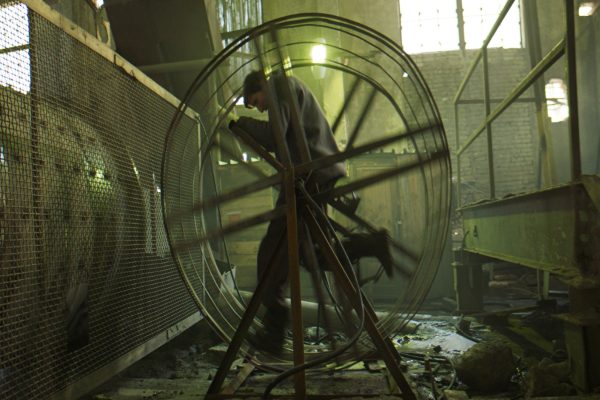 Industrial-dystopia may strike familiar with some, but shallow plot leaves the audience with too much work

Cogs in an endless machine, set in a dystopian world of undefined time or place, factory workers follow one simple creed – obey the system. They work, they rest, they work again; all under the constant supervision of small muffled-voiced cameras. This is all the surveillance required to keep the workers in check, as they follow every order without question for fear of ‘dismissal’. But all it takes is one loose cog to throw the machine off balance, and when one worker contracts a disease and searches for aid, he comes to realise this dilapidated factory is concealing secrets.

Nothing good ever happens in a mine or factory. It’s a semi-unspoken rule of cinema, as is that once something is investigated, there’s no going back. Despite a thin premise, Erdem Tepegoz’s In the Shadows constructs a world inside the walls of this broken-down but functional factory. Ever-fearful of being ‘dismissed’, worker Zait works through the pain and misery of endless hours mining, all to see his friends removed following their routine health-checks. To become weak or sick in this world is to be dismissed. But after faulty equipment and a skin disease seem to go unnoticed by the surveillance, Zait begins to question who is actually watching.

Every inch of In the Shadows trickles with adoration for filmmaker and Python Terry Gilliam. From the eccentric, mysterious repairman, to the endless streams of wiring and industrial ego-stroking, and especially in the constant surveillance, with rusted pipes echoing with voices all pointing to Gilliam’s Brazil, an obvious homage from Tepegoz. Hayk Kirakosyan’s cinematography attempts to emulate the framing of Gilliam, but more often than not comes over as practical, if banal. Grounded, earthy and messy, In the Shadows may not bow to the tropes of science-fiction visuals, but there’s enough detachment from reality to both directly remove the audience but also highlight the similarities we share.

Nowhere more do we see similarities than with the determination, though cracking, of Zait. Numan Acar’s nuanced performance refrains from trudging the film into the realms of horror where it could easily find itself. There’s a rich concoction of unspoken agony on Acar’s face, communicated without shrieks or even complaint. The misery of Tepegoz’s world is evident and doesn’t need melodrama. But as there seems to be enigma surrounding the factory, and upon encountering the repairman, Acar begins to morph from a day-to-day working drone to something more recognisable, more human in expression and performance.

Ironically, Tepegoz’s script falls victim to its very premise. As the workers scream out for a sense of something tangible, something concrete – so do the audience. It’s a fascinating premise with riches to read into, particularly that of the human body as a fleshy machine for industry, but it’s paper-thin.

There’s a substantial difference between sparking discussion and leaving gaps wide enough for the audience to fill themselves. Tepegoz quite rightly lets go of the audience’s hands for them to venture around the world he creates but doesn’t leave enough breadcrumbs for them to discover anything of substance. With dystopian commentary on harsh working conditions, labour workers and the surveillance state, In the Shadows leaves a little too much for the audience to fill themselves, rather than pushing for a deep narrative or character development outside of Zait.

Dystopia needn’t be the far-flung future or the reaches of space. In the Shadows may reject an abject time-frame, but cannot escape the parallels with our history of industry and the human cost. And though the film may revolve around a series of rusted coppers and mottled grey concrete, there’s still colour to find within its performances, but not too much solid ground to stand on.