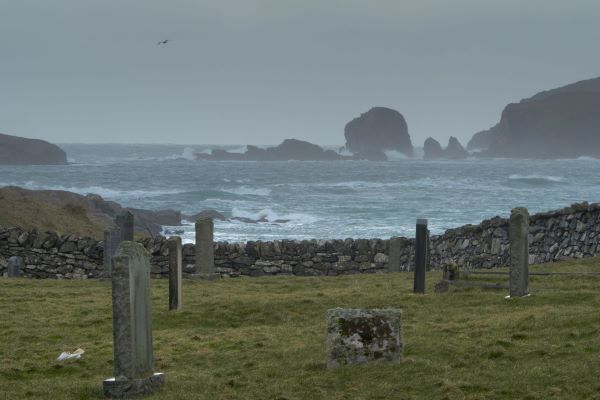 Lyrical documentary details an island's relationship to the sea

The Scottish fishing industry is in a position of political peacocking at present, a livelihood to throw around and place on a pedestal. But for the residents of the Island of Barra, fishing is more than an economic foundation – it is their heritage. But just how much of the industry, or better yet, the history and cultural impact it has upon the Highlands and Islands of Scotland do we really know? Iorram, or Boat Song for English speaking watchers, is less a documentary than a trove of memory, influences and beautiful storytelling. As, rather than telling a single story, it allows the unedited words and emotions of generations to speak unabridged and without contention.

With the waters overfished, and the legislation changing, the fishing industries and livelihoods of many have become ever more threatened. And though this sparking point, even in the past, is the jumping point for most conversations throughout Boat Song, it is the people on which director and filmmaker Alastair Cole centres. And as much as fishing plays a central part in their lives, stories concerning the Highland Clearances, island disputes, peat bogs, and storms make up as much of the island life as its integral industry. These include a ripple of ghosts and ghoulies, the supernatural vein pulsing deep at the heart of Scottish culture and folklore.

Boat Song reeks of tourist propaganda with rosy tints, but everything the film captures is raw and precious. The Gaelic language spoken throughout is respected and unaltered, adding gravitas to the myth and history of the island. Perhaps capturing this haunting reverence for superstition ideally is Aidan O’Rourke’s composition of the film, which somehow marries the words in another tongue with the staggering magnificence the camera captures.

In fact, between Lindsay Brown’s underwater photography and Mark Bull and John Duncan’s aerial cinematography – Boat Song is positively offensive in how gorgeously it frames the Scottish landscapes. It’s frankly infuriating how just when you decide upon your favourite shot in the film’s cinematography, the next shot can refute any idea that you’ve seen the choicest moment. Capturing the rolling haar as it descends on the small towns, and glints of amber light reflecting on the pools are equally as well-documented as the crisp underwater moments of wildlife, storms, and foaming maelstroms.

The only sting in Cole’s film is the pacing when mingling the audio with visuals. Boat Song is primarily made-up of audio interviews with islanders and fisherman between 1947 – 1975, unedited and maintaining the rough, scratchy recordings of the period. Occasionally, as well-paired as the various shots are with audio, momentarily one overtakes the other – removing the audience from either the crux of a story or dimming the appreciation of the camera work.

Sat in a pub corner, with a story echoing over the music and the comfort, Boat Song sits as a communal piece of cinema. There is something commanding in its presence, but with a gentle song to sing without force or pressure. It’s the stories of that weathered soul that everyone gravitates towards, placing down their glass and turning to listen to – without even realising, hanging on every word.

And rather than weaving these tales around one concurrent narrative, Cole instead allows the strands of storytelling to land wherever they may – they just happen to all lead back to the water. Boat Song, for some, will merely be a story of men in oilskins with lobster pots, but those willing to look past the fishing and lose themselves to the language, melody, and compelling visuals will realise how well Cole’s storytelling resurfaces the words of the past, for the Scotland of the future.