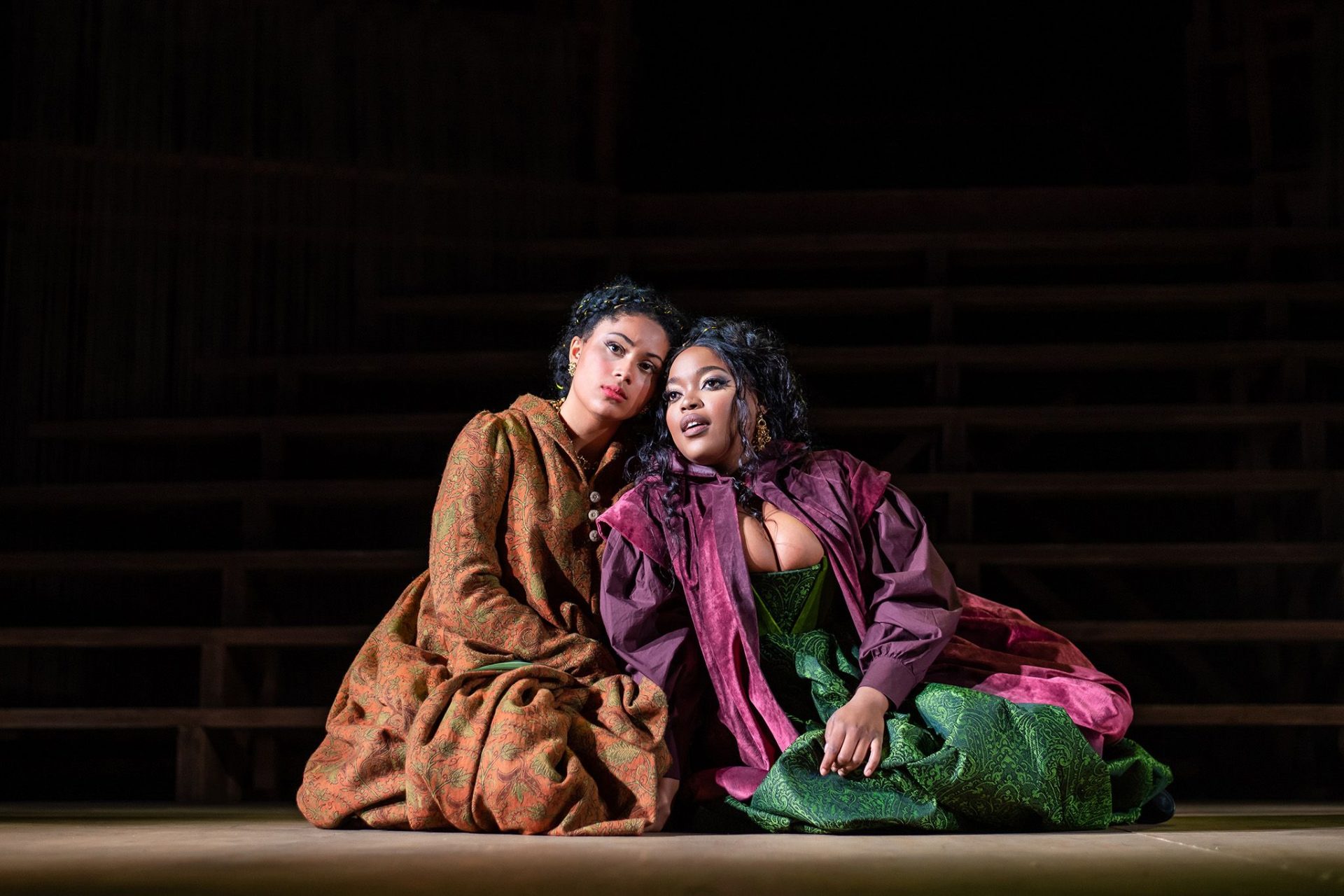 James IV: Queen of the Fight

Fourth instalment in the James Plays is a visual, lyrical marvel

The fourth instalment in Rona Munro’s James Plays series, James IV: Queen of the Fight seeks to once again explore an underrepresented period of Scottish history. As the audience are welcomed into the royal court of James IV, poetry and politics collide in this captivating production presented by Raw Material and Capital Theatres in association with the National Theatre of Scotland.

Unlike its predecessors, Queen of the Fight is not so much about the Scottish king but rather the figures who populate his royal court, hoping to seek his favour. After their ship is diverted on its way to England, Spanish Moors Anne (Laura Lovemore) and Ellen (Danielle Jam) find themselves trying to navigate and find a place in a foreign country, with their differing social statuses causing a rift between the two. Elsewhere, James’ young bride Margaret (Sarita Gabony) is struggling with her child-bearing responsibilities, while William Dunbar is hoping his poetry will help him secure the position of the king’s Makar.

There are a great number of intriguing power struggles going on throughout this play, which blur the public and private spheres. From bedroom politics to threats of rebellion from Highlanders and Islanders, each individual has something to gain – and lose. The constant sparring between various characters – particularly Keith Fleming’s Dunbar and Blythe Duff’s Dame Dounteboir – is thrilling to watch and presents a vibrant portrait of James IV’s royal court. These scenes are often brimming with both humour and tension, keeping the audience enraptured. The pageantry of politics is also brilliantly explored through the tournament scenes, which have been expertly choreographed by Movement Director Neil Bettles.

As a piece of pure entertainment, Queen of the Fight is a marvel. Munro’s multilingual script is lyrical and evocative, performed brilliantly by a stellar cast who excel both as individuals and as an ensemble. Daniel Cahill is brilliant as James, simultaneously light with charisma but heavy with the weight of his responsibility as king. The deceptively simple, stripped-back staging is striking, with Jon Bausor’s wooden fortress comprising various vertical looms a nod to the histories that are about to be woven before us.

As a piece of historical fiction, however, something has to be said about its historicity. Based on “Of Ane Blak-Moir”, a derogatory poem written by Dunbar, the play imagines who the subject of this poem could be and how she came to be in the presence of Scottish royalty. While Munro wishes to shed light on the diversity of James IV’s royal court, it is at the expense of her female protagonists’ origins. While described as two attendants from “Moorish Spain”, their characterisation gives no insight into the complex socio-religious situation in Spain at the time, particularly the forced conversion of Moors after the Reconquista and the suppression of their Islamic religion and culture – including their Arabic language. The only real allusion to Spain’s intolerance comes from the fifteenth-century ballad (beautifully) sung by Jam but solely Spanish speakers have any chance of making that connection.

It’s an oversight that is not just disappointing but a greatly missed opportunity, for Ann’s repeated references to new beginnings could have both added depth to their arrival in Scotland and offered a profound parallel between herself and MacDonald, an Islander whose own language and culture is being threatened. Generally, it can be said that the show’s historical aspect is somewhat undeveloped, with the rushed ending once again side-lining the Scottish king.

Still, despite these shortcomings, Queen of the Fight continues to be a spectacular piece of theatre and another thrilling chapter in the James Plays.