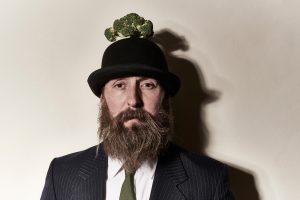 Jamie Wood
I Am A Tree

If Jamie Wood were an animal, he’d be one of those dogs that gets taken into hospitals and care homes to cheer people up. He exudes a warmth and empathy that makes complete strangers embrace him – and makes them glad that they did. He gives a good hug, does Jamie.

His latest show reflects with touching honesty on a time in his life when everything got a bit much. He needed to escape to nature, he declared to his long-suffering partner Wendy. He needed to become a tree.

The marvel of Wood’s shows is threefold. His warmth, his searing sincerity and his innocence inspire his audience to do all sorts of ridiculous things in the name of helping him tell his story. But this audience, at least, rose to the challenge with flair and aplomb. Is innocent optimism such a bad thing if it gives strangers sufficient faith to parade in a circle hooting like apes?

His imagination occupies a realm that most of us can only dream of. Assembly Omnitorium (behind the George Square Theatre) with its curtained entrance, banks of cushions and resident puppy is a fittingly bonkers location for an inventiveness that wouldn’t be out of place in a big top.

He’s an incredible story teller. He circles and loops and veers off course from his story throughout his hour long show, but gets back on track with the instincts of a homing pigeon and the story’s only richer for his no doubt carefully choreographed diversions.

But the thing that sets him apart from many a Fringe performer – and makes his show magnificent – is his faith in humanity. His honesty can’t help but scoop your heart out of your chest, give it a bit of a massage and lay it gently, respectfully back by the time that he’s done. His life got a bit tricky, he tells us. He didn’t know quite where he might find his meaning anymore. But he found it in the sweeping expanse of nature and his beloved and loving family. And we might do the same when we feel life is gobbling us up. Trust in the goodness of others is Jamie’s gospel. He should be prescribed on the NHS.