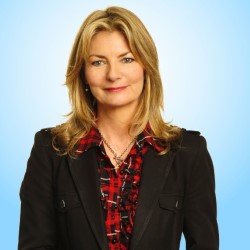 There is an air of defiance about Jo Caulfield’s new show; intentionally choosing to avoid the obvious themes that are sure to dominate comedy discourse in Edinburgh this year.  Apart from a brief reference to Brexit (in which she has to paradoxically talk about it to state that she isn’t going to talk about it), she has deliberately steered away from those choppy seas in favour of more tranquil, although not necessarily stagnant waters.

Pretending to Care feels almost like stand-up distilled to its pure form.  The subjects Caulfield jokes about are not so much staples, so much as foundation stones of observational humour: growing older, the travails of a long-term relationship, cultural differences between Americans and Brits, and those awkward moments when you accidentally order a lap dance.  The real basics.

The challenge is obviously to make such familiar material sound fresh and funny, and this is achieved effortlessly.  Whether it’s through tales of her husband’s nefarious plans to kidnap cats for reward money, explaining why importing American ideals of customer service to our surly shores is a bad idea, or the relentless horror of a ‘Grab-a-Granny’ evening at the infamous Cavendish; Caulfield always finds a new spin on potentially hackneyed material.  This ensures that the laughter is not merely down to the audience’s recognition of the familiar.  She hasn’t reinvented the wheel, but has added a really spiffing set of alloys.

What also works in her favour is her ability to mask some seriously barbed and acidic jokes in her chatty, bright delivery.  She has the convivial, conversational air of someone like the late, lamented Victoria Wood; which only makes a brutal takedown of the child of an acquaintance on Facebook all the more impactful and hilarious.

There is perhaps a glimpse into her reasoning for a set heavy in anecdotal, more personal material.  A tangent that develops after some audience chat reveals a recent family loss and a brief flash of real, unguarded emotion.  It’s warm, affectionate, and a genuinely lovely moment.

It’s this reflection on personal experience throughout Caulfield’s show that really resonates with the crowd.  Much of what she talks about could be dismissed as the most hoary of stand-up cliches, but there is a universality of experience in those themes that will always yield a dividend for a gifted comedian.  Jo Caulfield is certainly in that class.