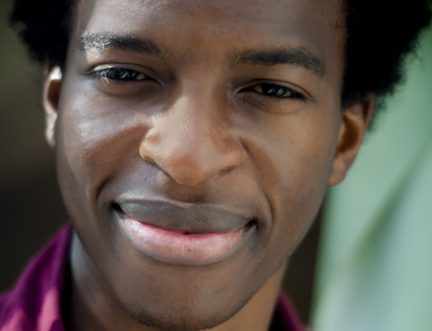 The Edinburgh International Book Festival does a great job of bringing new poets together to share the stage. Earlier in the festival Miriam Nash and Rachel McCrum presented their new poetry collections and tonight we have the pleasure of hearing Kayo Chingonyi and Adam O’Riordan. Kayo has just released his first collection of poetry called Kumukanda, meanwhile Adam is at the festival to read from his second collection A Herring Famine. The event is chaired by local poet Ryan Van Winkle and begins with Adam reading from his new book.

A Herring Famine features poems about the sea, family history, absence, sadness and love. The poems are short and wild and it is the kind of collection that you want to read in solitude, whilst curled up on the sofa on a rainy day. The poet mentions that he attempted to write a more warmer book, when compared to his debut collection, however the poetry that he wrote ended up feeling stark and wintery. Adam states that “if the first book is colour, then this one is black and white”

Kayo has just released Kumukanda and is appearing at several events during the Book Festival, including an excellent evening that he hosted as part of the Unbound strand. When in conversation with Ryan Van Winkle, Kayo Chingonyi discusses the process of putting together a new collection and mentions that “the idea of an incremental process is needed in the creation of a collection“. Kayo reads a selection of poems including The Colour of James Brown’s Scream. Here the poet showcases his love of music and how it influences his writing. This is obvious in the rhythm of his words and the engaging and animated delivery. As with Adam O’Riordan, Kayo is a brilliant reader of his work and the audience at the Edinburgh International Book Festival have had the opportunity to hear two fantastic poets read from their exciting new collections.