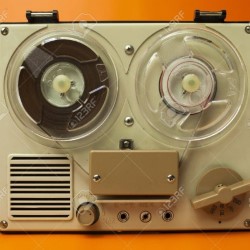 A short but solid Beckett adaptation

Has there ever been a Fringe without a Samuel Beckett play? This year, as well as Waiting for Godot at the Edinburgh Yes Hub, The Royal Scots Club plays host to Krapp’s Last Tape, a one-act play by the Nobel Prize-winning Irish playwright.

In this production directed by Lorraine McCann, a man (Ian Aldred) sits at a table and listens to a recording he made 30 years ago. In true Beckettian fashion, the plot is minimal: Krapp sits, he listens, he eats a banana. Every little detail, from a grunt to a long, suspicious stare is emphasised, placed under the microscope of the inquisitive audience.

There is some gentle humour, but at its heart, Krapp’s Last Tape is about the loneliness and regret that come with old age. Krapp is left with only his memories and his recordings for company, perhaps reflective of Beckett’s own feelings when he wrote the play in the 1950s. Krapp is reminiscent of the lonely hero in T. S. Eliot’s poem ‘The Love Song of J. Alfred Prufrock’. Bittersweet memories of past love affairs haunt the old man, the sweetness giving way to outright bitterness.

Like a lot of Beckett’s plays, the dialogue (such as it is) is meandering, enigmatic and curt. Aldred conveys with minimal effort Krapp’s self-loathing and despair. At the beginning, extended use is made of physical theatre, as Krapp shuffles around making small noises, and more could perhaps have been made of this.

In some ways, the ornate surroundings of The Royal Scots Club’s Hepburn Suite are too grand for this minimalist play, which would be better suited in a sober, black theatre space. It also ends very abruptly, lasting for barely half an hour. This shouldn’t come as a surprise, given that it’s only a one-act play, however it is advertised as lasting for one hour.