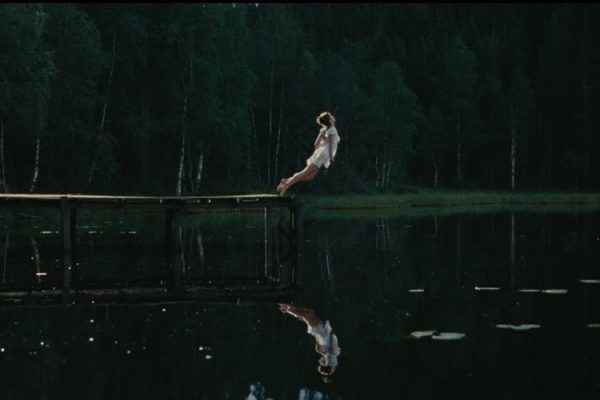 Beautiful but generic Norwegian horror fails to make a splash

Norwegian writer/ director Nini Bull Robsahm takes on her nation’s horror heritage with her new film. Lake of Death is an adaptation of De dødes tjern, a 1942 novel that had a previous cinematic adaptation in 1958, and which is credited with seeding the interest in horror in Norway. You can’t fault the ambition in trying to put a new spin on a seminal text, especially when the original is obscure outside of its country of origin. However, this update is overly beholden to far more familiar sources, leaving Lake of Death as a beautiful but generic cabin in the woods movie.

A young deaf man named Bjørn vanishes in a remote forest around a lake. A year later his sister Lillian (Iben Akerlie) returns with four friends. The lake has many legends and is thought to emit a hypnotic siren call to those who stare too long at its eerily placid surface. Her friends are after a fun weekend, but Lillian is understandably distracted and begins to have visions that may be hallucinations brought on by her grief, but may also be evidence of something sinister related to the stories about the lake.

Lillian’s friend Bernhard (Jakob Schøyen Andersen) is researching a folklore podcast about the lake, but Robsahm is keen to reference horror from far beyond Norway. This is done through the post-Scream cineliteracy of its characters, but also extends to the opening credits, which use the variant of the sans serif font that adorned the front covers of Stephen King‘s novels in the ’80s. This kind of self-reflexivity has been used before and to better effect in Norway itself in the Nazi zombie comedy Dead Snow, and more widely afield, Cabin in the Woods stripped the subgenre down to its component parts and reassembled it in new ways. Lake of Death is nowhere near as radical as Cabin and unlike Dead Snow, the references are often used in lieu of characterisation rather than as augmentation.

The muddled script spends the first two acts trying to tease the audience with numerous potential directions before settling on the least satisfying outcome. Is it a supernatural chiller? A psycho-thriller? A slasher? Folk horror? All of these are possibilities, and Robsahm engages tropes from them all without crafting something cohesive enough to justify the kitchen sink approach. The final half-hour does however coalesce enough to lurch into life, propelled by Akerlie’s haunting, stoic performance. It remains a shame however that the film doesn’t lean more into national idiosyncrasy in the manner of something like André Øvredal‘s flawed but singular Troll Hunter.

The technical aspects also go some way to making Lake of Death just about worth your time. The visuals are way above the standard of most low-budget horror filmmaking, even in the era of high-quality digital photography. Axel Mustad‘s 35mm wide-lensed work is frequently gorgeous, going a long way to explaining why the clearly traumatised Lillian could be enticed back. Even when things are at their worst and the horror has reared its head, Akerlie is often shot like a pre-Raphaelite painting of one of Shakespeare’s tragic heroines. Also gracing the technical team is editor Bob Murawski. A long-time collaborator with Sam Raimi, Marawski also spliced Kathryn Bigelow‘s Oscar winner The Hurt Locker, so he clearly knows how to mine the tension from any scene. The curious flatness of most of Lake of Death is therefore more difficult to explain, but the fault lies primarily in the writing.

Perhaps the biggest issue Lake of Death is that the characters are never distinguishable enough that we’re sold on the themes of grief and guilt. We’re just never enticed enough to dive wholeheartedly into those waters ourselves. It also never lives up to the promise of the films it references. Misery, The Evil Dead, A Nightmare on Elm Street, and Friday the 13th are all referenced, either verbally or visually, but Lake of Death fails to conjure any of either the energy or individual personality of these films. Robsahm is obviously able to gather talented people around her. If she can match the quality of writing to the technical excellence at her disposal, she’ll be onto a winner. Until then, this is one in which to simply dip the toes rather than get fully immersed.