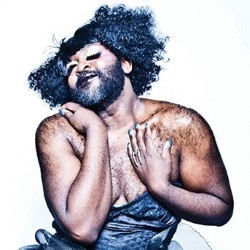 Cabaret singer, singing the songs of our youth, which will only be 'For (your own) Good'

Entering the Piccolo Tent from the back, Le Gateau Chocolat knows how to make an entrance. Strutting down the stairs in a gorgeous, black sequined leotard, and wide brimmed wedding hat, singing a rendition of Kate Bush’s ‘Running Up That Hill‘, he immediately has the audience eating out of his hands.

Icons marks Le Gateau Chocolat’s return to the Fringe, his first since 2015. Nigerian by birth, with his bald headed, bearded face, ‘Ermintrude’ eyelashes, yellow gold eye make-up, green painted fingers, and a series of sassy costume changes, Le Gateau Chocolat certainly strikes an imposing and rather incongruous, yet likeable persona. Larger than life, with a deep rich baritone voice that’s like melting chocolate, he’s someone you warm to quickly.

With a set reminiscent of an 80s teenager’s bedroom (posters of his icons and 80s films stuck on the wall as well as an old TV), it provides the place for Le Gateau to bear his soul. He might have had it with religion, but Icons is a show that seamlessly weaves from Pavarotti to Whitney, investigating his own objects of worship, through the music of his own personal icons.  From falling in love to lost loves, to forming new friendships, from running marathons, to being present at children’s births and through the election of various presidents – music has punctuated these moments.

With outstanding musical direction from Marty Hailey, who also provides the backing vocals, guitar and percussion accompaniment, along with seamless keyboards from Andy Jeffcoat, Le Gateau makes the songs of Kate Bush to Annie Lennox to Madonna his own.  He sings with punctuated comic timing, with a superlative baritone and impressive vocal range that others would be jealous of.  His rendition of For Good from Wicked, a tribute to a friend Adam who took his own life, is so touching and eerie, and gives us an insight into just some of the life moments that have shaped Le Gateau.

‘For’ (your own) good’, Le Gateau Chocolate is one show at the fringe you will want to take a bite of. Like the lyrics of ‘For Good’, “I’ve heard it said, That people come into our lives for a reason, Bringing something we must learn”, an hour spent with him will be an uplifting, nostalgic and enlightening evening of superb cabaret that will have you reliving your youth long after you leave the auditorium.