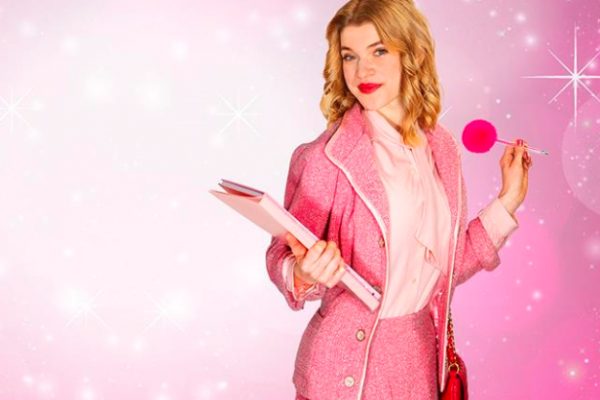 Blonde musical is not so dumb

Based on the 2001 novel and movie of the same name, Legally Blonde: The Musical follows wealthy Malibu girl Elle Woods as she attempts to recover from an expected proposal gone awry by following her boyfriend Warren to Harvard Law School in an attempt to prove she is a ‘serious’ individual and not the fool that she is taken for. On the way, she becomes entangled in student politics and a celebrity murder case and learns some important lessons about being comfortable in your own skin.

This production, by the Royal Conservatoire of Scotland, takes to the stage in the Assembly Rooms and represents the fifteenth year of the school performing at the Fringe.

The most striking aspect of the show is how pared down by necessity the staging is. In a larger theatre, audiences might reasonably expect a large moving set with complex lighting and other effects. However, this does not detract from the effect of the show. Rather, it enhances the positive aspects of it. By combining simple lighting and clever prop work, Laurence O’Keefe and Neil Benjamin’s clever and funny music and lyrics really come to life. In particular, songs such as ‘Omigod you guys’, ‘Blood in the Water’, ‘Chip on My Shoulder’, and ‘There! Right! There!’ are presented clearly in their full spectacle.

The cast of highly talented young actors put in all their effort to bring this tale of finding depth in perceived shallowness to life. Vanessa Campbell’s Elle is a relatable and human heroine, ably backed by her Greek Chorus given real energy by Heather Condor, Rachel Hunt, and Inna Tahkanen. Moreover, Max Weinberg is a real treat as the vicious and manipulative Professor Callahan. In fact, there’s not a poor performance in the entire cast, especially given how many players have to chop and change between different characters at an impressive rate.

While the simplified and stripped-down visuals may deter the audience member less familiar with the nuances of good musical theatre, this production will delight anyone who appreciates good writing, music, and characterisation over aesthetics; a concept that chimes neatly with the big idea of Legally Blonde: The Musical, that it is what is beneath the surface that matters and that looks are to be left up to what is comfortable for the individual. In those terms, this production is a very comfortable show indeed.