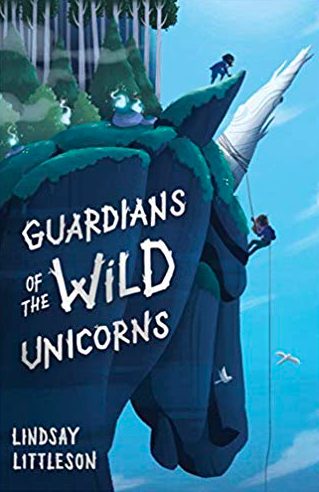 Littleson captures the imagination with her characters and fresh take on the unicorn.

If you want a reader to root for a character, create a likeable underdog. It’s a bit of a tried and tested method of course, but executed with panache in children’s author Lindsay Littleson’s new middle grade novel Guardians of the Wild Unicorns.

They don’t come much more likeable, or more underdog, than Lewis; the geeky, wimpy kid on a school trip to the Scottish Highlands. At the fictional outdoor centre, he is the one with the fear of heights and not a sporty molecule in his body. He makes up for all of this with kindness. For example, his faithful support of Rhona whose problems are never quite spelled out until the end of the book – suffice to say she is a kid with issues.

The world of school residential trips is vividly and believably described, but of course, the title is a giveaway for there is more than a dose of magic in the mountain setting. Not merely rooted in the real world, the Highland landscape Littleson evokes is home to unicorns, the ancient heraldic animal of Scotland.

In a world awash with unicorn merchandise (mostly of the pink and fluffy variety), Littleson has achieved something impressive: an entirely new and topical angle on the unicorn myth. Land ownership and land use, biodiversity and conservation issues are all explored in subtle ways, opening many possible avenues for learning to classroom teachers. But first and foremost, Guardians of the Wild Unicorns is a story – an adventure of young people defying their fears and breaking the rules to achieve something worth fighting for. They may be insecure, lonely, incapable or burdened with responsibilities they did not seek, but their choices can make a positive difference – an empowering concept for young readers.

The novel offers a recognisable setting but brims with darkness and threat. The key ingredient in any children’s story, says Barry Cunningham (who famously decided to take a chance on a new author called J.K. Rowling), is a worthy villain. Littleson’s adversary, tweed-clad Ailsa McAllister, is positively chilling, mainly because she does not conform to the hideous picture-book-villain stereotype. She may fool the adults with her grace, poise and looks, but she is part-Cruella de Vil and part Duror from The Cone Gatherers. Young readers will love to hate her.