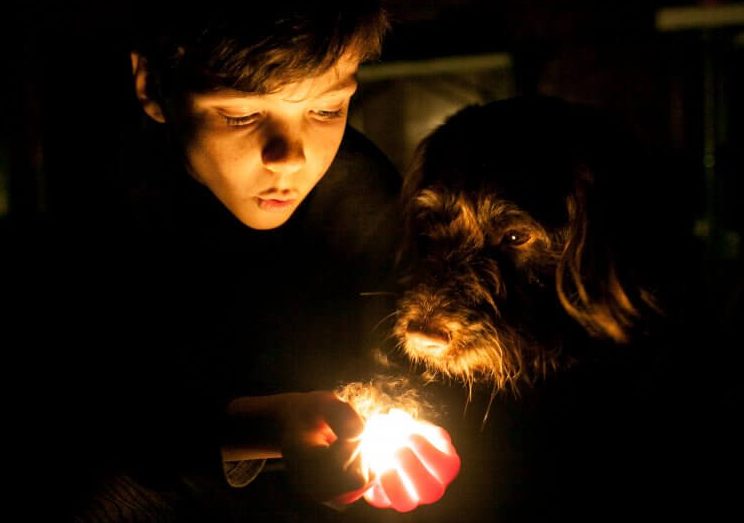 The lingering impression is one of wonder in Vision Mechanics' latest.

Intrigued, the audience bend down to unzip and untie shoes and tiptoe into the especially created Bedouin style tent erected inside Eden Court’s Jim Love Studio for Little Light, a collaboration between Edinburgh based Vision Mechanics and Jordan’s Haya Cultural Centre. Children and adults settle cross-legged (mostly awkwardly) on the cushions on the floor and let their eyes rove: metal cut-outs of figures, lanterns, torches and a set platform for puppetry, light sources aplenty – there is much to intrigue here. Soon the half-light dims and the technically ambitious performance begins with projections of a moving night sky animation with constellations, amplified by nifty hand-held torches, shadow puppetry and even laser pointers.

The two performers, Jordanians Hanin Awali and Mohammad Awad, perform theatre-in-the-round, manipulating props and puppets with ease to tell the enchanting tale of a little boy who lives in a distant village and is feeling isolated. The star magic takes effect and sends a stray dog into the lonely boy’s life.

Despite the simple rod puppets and their stock utterances (commedia-style in grunts, laughs and universal exclamations), the story is clear. Sumptuous visual effects and thoughtful sound design complement each other and keep audience interest throughout. Morning and night alternate logically, comforting and predictable routines in the puppetry anchor children in their own experiences, and magical happenings are cued effectively by glockenspiel music.

One of the most effective moments in the performance is the appearance of a dog, tactile and life-like, after the ethereal light projections. Delighted audience members lean forward to touch it and laughed at its antics chasing a ball, a very effective scene. Another highlight is a giant colourful kaleidoscope which spins to reveal the glorious, sun-drenched landscape of the friendship between boy and dog. But there are moments of tension, too, notably the frantic panic after an accident. The set and props are never less than imaginative, especially the use of a temperamental bedside lamp. Ending with reverse projections of the night sky once more, it is a rounded structure and a satisfying ending, especially when the two performers sit down with the audience to gaze at the night sky.

But there are some limitations to almost wordless performances. The few spoken words (counting, in the main) were said in Arabic and create a little confusion in the audience, especially towards the end when audience members are addressed directly. The key plot of the play is never unclear, however, and young audiences tend to be much more forgiving of uncertainty than their adults.

The lingering impression is one of wonder: wonder at an audience’s ability to unsee the brown coat-clad performers, in plain view at all times, and blend out all but the puppets, to switch seamlessly from puppetry, to acting, to shadow puppetry and back – and losing themselves in a wordless tale without any kind of narration. The complex and ambitious sound and lighting design merely provides the springboard for this evocative story to soar in young imaginations.

Is any of it superfluous? Possibly.

Does it matter? Absolutely not.

Immersive children’s theatre at its most innovative.