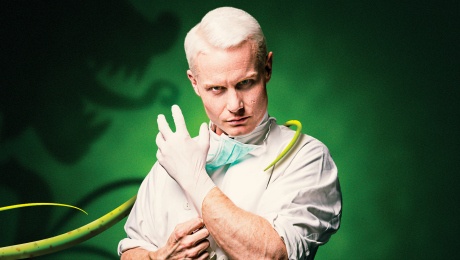 Down in the urban wasteland of Skid Row, luckless gardener Seymour Krelborn stumbles across the (bloodthirsty) secret to growing a gargantuan plant, the Audrey II, whose miraculous girth soon wins his little flower shop – and its employees – unexpected fame. But as Seymour struggles to keep the beast fed (and his fortune flowing) he soon finds out that having a creepily symbiotic relationship with a carnivorous plant isn’t all it’s cracked up to be.

Little Shop has a small cast, but there is nothing under-powered about this ensemble. Sam Lupton and Stephanie Clift are a compelling leading pair, bouncing with giddy slapstick energy, adorable chemistry and killer vocals. The nervy geekiness of Lupton’s sweater-vest wearing Seymour is just off-kilter enough to straddle the line between socially-awkward and sociopathic. Clift’s fantastic comic timing balances Audrey’s Betty Boop stylings with an endearing dorkiness, making her one of the most engaging characters onstage. The chorus of three – Sasha Latoya, Vanessa Fisher and Cassie Clare – are the convincingly characterised muses of Skid Row, greasing the palm of the plot with tight dance moves and Mariah-worthy vocal-runs. In the centre of the madness, one of theatre’s most famous puppet creations, the Audrey II, oozes malice and madness, courtesy of brilliant puppeteering from Josh Wilmott and a fantastic line in bone-dry comedy from Neil Nicholas. Encompassing all of this, David Shield‘s kooky set makes Skid Row a crumpled paper-bag of a town – crushed and forgotten but still, in its darkest corners, pulsing with sickly neon life.

Ex-X-Factorer Rhydian Roberts plays his blink-and-you’ll-miss-him cameos a little too brash, favouring one-note comedy over a chance to show off some more interesting character acting – but we can’t fault his voice or his playfulness. As always, Howard Ashman’s book feels a bit stretched – Little Shop could easily lose a few linking musical numbers and play as a much tighter one-act. But then, in the current climate, it feels kind of criminal to omit any of the schlock ‘n’ roll score, which is as catchy as ever, and which the cast do full justice to.

Perfectly-pitched musical comedy spot-on for anyone who’s feeling chewed-up and spat-out by 2016.