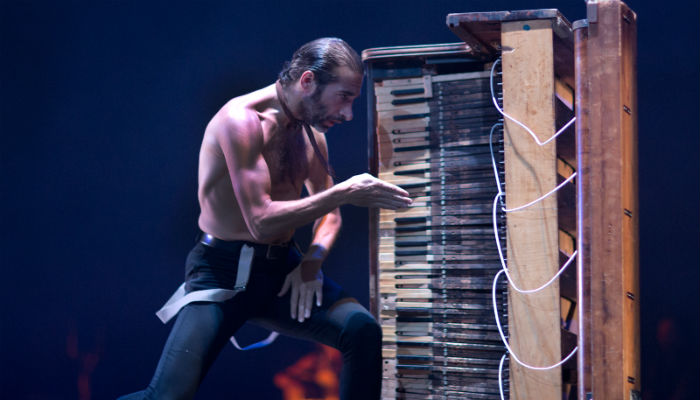 [Rating:3/5] A blood pumping dance piece on the defiance of the Spanish Roma.

The Nazis had a particular hatred for European gypsies. In Lenny Riefenstahl’s controversial 1954 film Tiefland, they are symbolic of both the impure and the exotic. Many of the extras were taken from concentration camps, returned and died there after the filming. Countless numbers (an estimated half million but probably more) of the Roma from all over Europe ended their days in Hitler’s death camps.

In Spain, the persecution of that country’s Roma community is rarely discussed but in this defiant dance piece Israel Galván who was also responsible for choreography and musical script (along with director Pedro G Romero) tells the story in flamenco – surely so much more than dance: it’s music, song, storytelling and a whole way of life. There is no plot and a bare stage. Sometimes the story of the Romas’ plight gets lost.

Galván is very much the lead. Others tell the story too – notably Carmen Lérida from one of the leading musical families in Seville. The Spanish and the Spanish Roma are renowned for their pride and their passion; add to this the blood pumping anger and fear of persecution and you get a great, gutsy piece of stripped back stagecraft drenched in the tears and sweat of the heartbreak of the gypsies of southern Spain. The bare-chested Galván dances alone; we have the finger-clicking and foot-stamping of traditional flamenco but none of the prettified polka-dotted tourist conceits. At one point Galván’s dance partner is an upended broken-down piano. And the music, though recognisably Spanish, is modern with some darkly challenging passages with the crack of bullets and the sound of deportation trains. Listen out too for Antony and the Johnsons’ Hitler in My Heart.

The enormous stage of the Festival Theatre creates a distance between audience and performer. At times you want to leap up and feel the vibrations coursing through you.