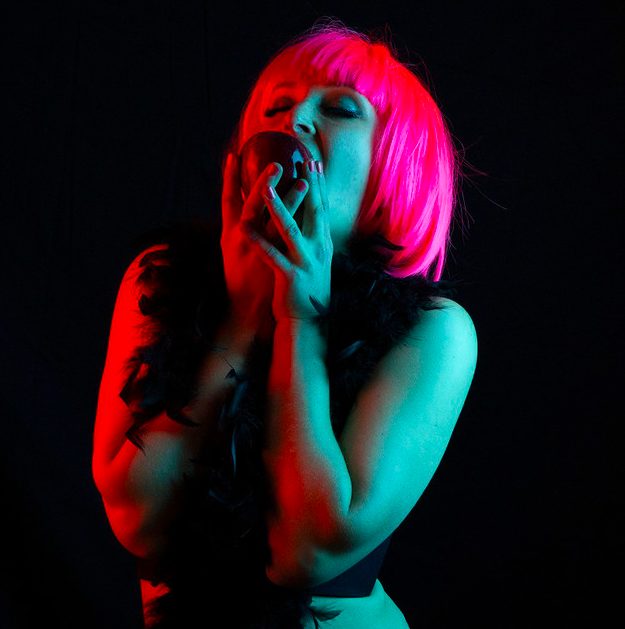 Love Bites is a competent one-woman spoken word cabaret from Melbourne artiste Fiona Scarlett, who presents the show in the character of the pink and frilly Fifi La Rouge.

It’s a good workmanlike show, where Fifi plays several women talking frankly about love – either current or lost –  and particularly its repercussions.  It’s all very skilfully done, and Scarlett flips easily from one character to another without effort.  We have the French lesbian, the Melbourne widow, the ditzy London career girl who’s secretly bleeding inside – I know that every Star Trek fan will tell us we can’t go back in time and alter the course of history, but please could we just go back and stop Helen Fielding writing Bridget Jones? – and a whole host more.  All good solid material but, really, fairly standard Fringe theatre fare and nothing that would set the world on fire.  Particularly in a Fringe like this year’s that’s filled with one-woman shows of a similar type.

What sets Love Bites apart, though, are Fifi’s songs.  Boy, can this canary sing!  From Jazz to Torch, from Chanteuse to Cabaret, Scarlett holds her audience spellbound during her – frankly, stunning – musical numbers.  In fact, it’s almost like being transported in time and when she performs her French numbers it’s as if we can hear the rasp of Piaf or the gravelly tones of Juliet Greco; her cabaret numbers could be straight out of Berlin in the Jazz era and her finale torch piece is reminiscent of Judy Garland’s epic 1960s London Palladium concert that introduced Liza Minnelli to the world.

Far be it from this reviewer to tell an artiste how to plot or construct their next show, but if Fifi La Rouge were to come back next year with a bill of fare that was just her amazing vocals, this reviewer for one would certainly be at the head of the queue demanding tickets.