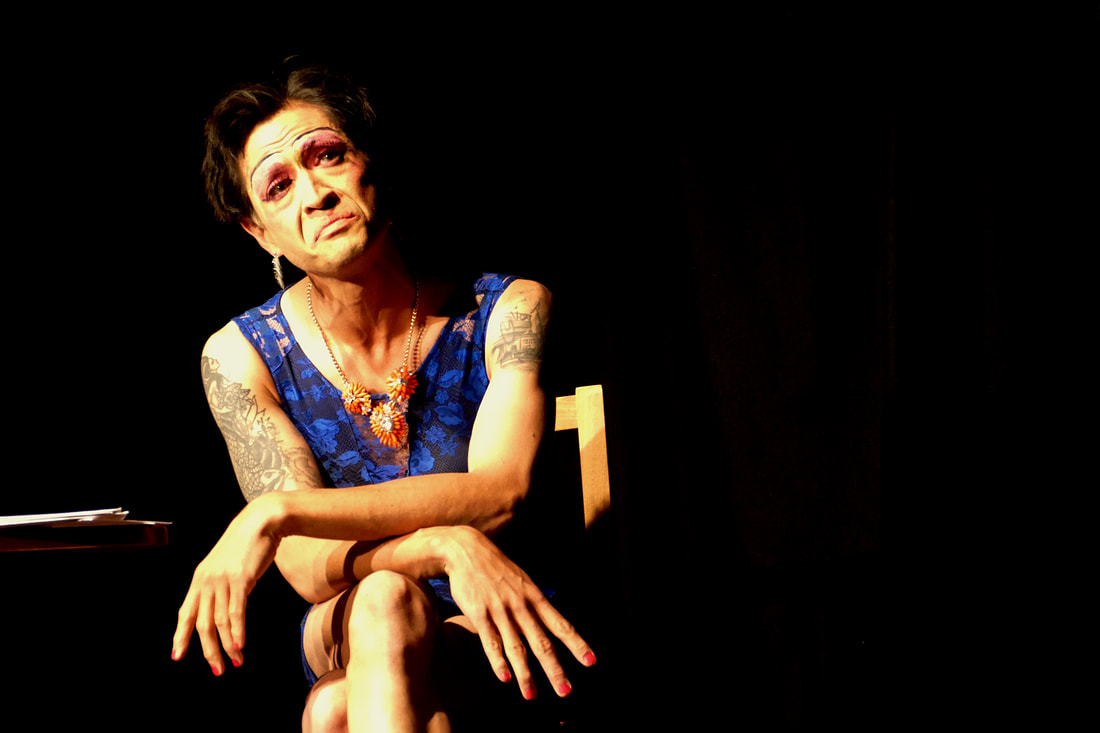 A noble and thought-provoking piece

Even in embattled times, Eden Court is still admirably pursuing its mission to bring diverse entertainment to Highland audiences. This new drama by Andy Moseley‘s new drama, Make-up, is a noble and thought-provoking piece. Starring an excellent Moj Taylor as Chris and his troubled drag persona, Lady Christina, the monologue sees Chris returning to his home town of Wolverhampton for a show.

Worked with just a few props and lighting that draws us into the characters’ anguish, Make-up distils the decades. Moseley and Taylor capture well the tortures and fears of Chris/Christina as she emerges from a performance before that West Midland audience, offering some poignant dressing-room reflections.

This small but intrigued Inverness audience, then, meets a familiar trope: the performer’s lament to sympathetic but ultimately uncomprehending listeners. Yet, the moments of Archie Rice pathos are brief. We quickly grasp the motive here – the clever intertwining of Chris/Christina’s experiences within the fabric of social and cultural change.  The removal of shoes, dress, wig, make-up – Lady Christina’s entire identity – are symbolic of Chris coming to terms with who he is. In turn, we begin to understand Chris’ estrangement from his father as he bemusedly recalls his 2nd-generation Irish immigrant tolerance, even reinforcement, of traditional prejudices.

From the very different world of 2022, we recognise Chris’ sad bafflement at his father’s contradictions. Like so many of that generation, this parent rejected his son, saw his gayness as fundamentally ‘wrong’, even while enjoying the TV absurdities of Dick Emery and Larry Grayson, as well as the androgyny of David Bowie. The message of how hostile our society was before the Clause 28 furore and the advent of greater tolerance, is a brutal one, and Chris/Christina both bear the scars.

That said, the drama also urges more a contemporary reflection. This well-written, lively monologue provokes a myriad of emotions. The jaded Christina bemoans a new generation – the Drag Race phenomenon, with its flashy costumes, lavish make-up and lip-syncing. Her years have been less glamorous, with her barely surviving on the club drag circuit. We see her parody of womanhood as a fading drag form. Lady Christina has been more than a secret alter ego for Chris; she is also the embodiment of that older, more satirical form, and she harbours fierce resentment towards the new era’s superficiality.

As Moseley shows in his thoughtful programme notes and blog, the reactions of the established drag community to Drag Race are mixed: “…basically a drag version of The X Factor”, “it has Barbie–fied the art of drag…turning it into a basic cable commodity”. However, it is also considered “one of the few places we can see our queer experiences reflected on a platform of this scale.”

After hiccups, Make-up has emerged from the pandemic a skilled and successful drama. It nudges you to new insight and understanding, and deserves a wider audience.