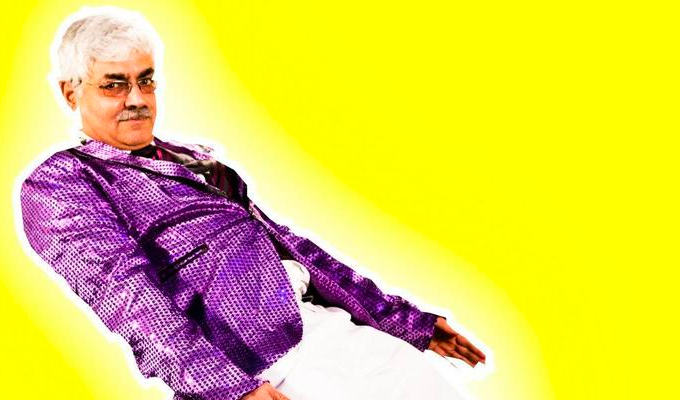 Mark Silcox
I Can Cure... [Perfect and Arena-Ready Show]

In which Mark Silcox goes glam. This year, the deadpan doctor has donned a sparkly showbiz jacket, all the better to present his now perfect and arena-ready show. And he has upgraded from his usual Italian restaurant basement to an actual comedy club, albeit the most basement-y, un-comedy bit of that comedy club.

Absolutely nothing else has changed.

The bare bones for those unacquainted with Dr Silcox’s oeuvre: the show has two parts – part one in which he introduces a home made cough recipe, part two in which he explains the origin of homosexuality. Chickpeas are served beforehand. Boiled eggs and tea at half time. It is all presented unironically off laminates in the style of a 1970s Open University broadcast. Any comic element seems incidental. Its deeper purpose, if it has one, remains obscure.

This is the fourth year he’s done the show, the fifth time I’ve seen it and the second time I’ve reviewed it and still there are bits I don’t remember seeing. Has the segment on Buddha, complete with an actual bona fide gag, always been there? And when he stops his history of evolution some way short of the usual explanation of homosexuality, is he toying with us? Dropping his greatest hits in and out of the set like an actual arena act? Or has he just lost his place?

The regular ‘big bang’ section, in which he inflates a hydrogen balloon to illustrate the origin of everything, ends after some struggle with the balloon fizzing out limply in his hand. Five years of practice and it’s still perfectly imperfect.

He corpses constantly, which takes some doing when you’re delivering what remains a dull lecture. You corpse with him. You ponder, again, for just one second, that maybe there are greater depths to Silcox’s art than we realise and that this is an unintended glimpse behind the curtain. Maybe this durational piece of anti-comedy will one day fully reveal itself; we mere mortals will finally understand. And then the thought passes and he’s back to reading evolutionary history. This is what it is, no more no less. Long-term Silcox watchers do not question.

But something much more serious is amiss tonight. Things have changed since last he was here. People have got wind (of his genius, not from the chickpeas). He’s popular. The what-the-hell-is-going-on wonder of being trapped with three others in a boring science lecture by the Fringe’s nicest man has gone. He’s on TV now. He’s mainstream. He even guest stars in the actual Comedy Award winning show. And like when your favourite indie band goes massive, you can’t help but feel betrayed. Maybe Mark Silcox actually is arena ready. Silcox is a sell-out.