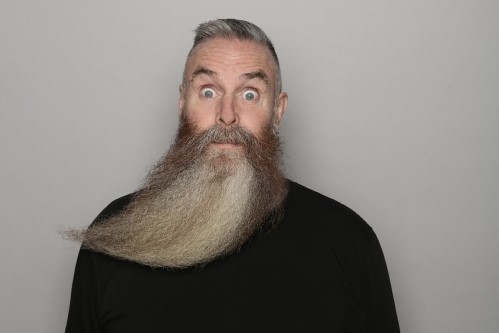 Kitted out in a green t-shirt with brown shorts, shoes and colourful socks, Martin Mor seems to have donned the archaeologist look as he excitedly ambles onto his stage. He is a colourful, welcoming figure throughout his latest show, Instigator. For 55 minutes full of shocking anecdotes and personal insight, Mor demonstrates an obsession with starting something different, instigating something new. Contrastingly, the comedy format feels anything but new, a familiar stand-up setting with one man and a mic (even if Mor thinks the stage area looks like a sex dungeon).

A comedy figurehead fizzing with excitement for life, Mor makes an effort to forge relationships with audience members while simultaneously delivering the goods. His latest stand-up is a very personal one, which looks back on his past and recent events in his life. Yet from potentially humourless situations he plucks out bizarre and amusing interpretations that have the audience in hysterics at his twisted thinking. Some of these situations lend themselves to punchlines that don’t always land as anticipated, but Mor gets the most laughs from his proverbial sparring with crowd members rather than his one-liners. He is eager to get to know the people in the crowd, share in their life stories and offer his own affirming advice. If you can take your eyes off his magnificent beard, you will listen intently, and his words of wisdom induce a grin on even the most solemn audience member’s face.

Instigator certainly has its highs and lows, and for a show about wanting to start something new feels a tad too traditional. But this is what Mor does best, as he has proved over his many years doing comedy. His humour can be an acquired taste, but he seems to be selflessly interested in everyone having a good time that even at its worst Instigator is a worthwhile experience. At it’s best, it’s utter gold.