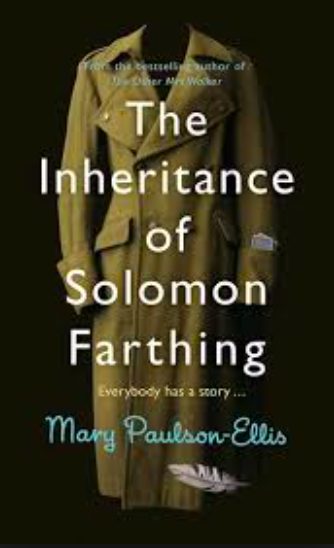 Scruffy Edinburgh heir hunter Solomon Farthing has only a few clues to go on for his latest case: the body of an old soldier, £50,000 in cash sewn into the lining of a suit, and a pawn ticket. He also has a debt to pay and his competitors are closing in on him fast. In The Inheritance of Solomon Farthing, the reader follows Farthing as he scours the city and travels across the United Kingdom to complete the case which also takes him back to the grim and haunting days at the end of the First World War.

The second book from Mary Paulson-Ellis, author of The Other Mrs Walker, is a mystery novel in the most classic sense. The author begins by placing a locked box in the middle of the floor, in the form of her dead soldier’s estate, and sets about slowly and carefully opening it; being sure to give the reader just enough to stay gripped but never enough to reveal the next plot point. This clever use of structure and pacing is the book’s greatest success.

Paulson-Ellis is also skilled in characterisation. Both Solomon and the company of WW1 soldiers, around whom the novel revolves, are well-drawn, deep, humane, and intriguing. Also, by choosing to jump through time between her two settings Paulson-Ellis succeeds in keeping the reader aware that there is a connection between them all and thus, keeps the central concept of her book in the forefront of the reader’s mind. After all, a good mystery story never lets the reader forget about the mystery.

However, there are some parts of the novel that don’t quite work. There is a borderline ‘deus ex machina’ plot point towards the end that feels a little desperate and a few beats involving Solomon befriending a young boy seem far-fetched against the novel’s more grounded overall feeling. Additionally, those who are unfamiliar with Edinburgh and its tropes may be unable to relate to the Auld Reekie-centric minutiae and detail Paulson-Ellis employs in her book.

But these slight stumbles don’t do much to impede what is an otherwise solid second novel from a skilled author. The Inheritance of Solomon Farthing is tense and alluring but it is also humane, charming, and enjoyable.