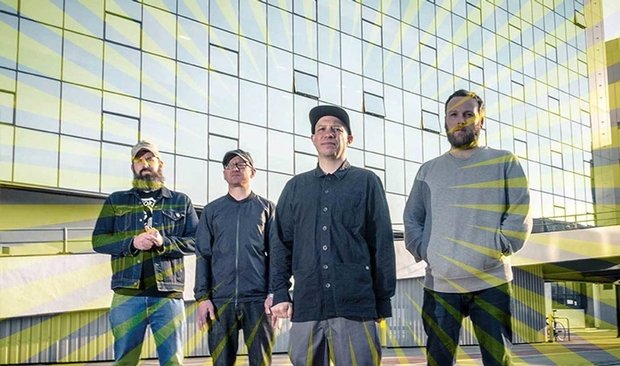 Mogwai return to the Edinburgh International Festival for the first of two performances at the Leith Theatre. The band is no stranger to the Festival after previously wowing audiences with their Atomic event with Mark Cousins back in 2016. This time they come as part of the continuing Light on The Shore programme highlighting the best in Scottish music.

Before we get to the headliners though we have support from Rev Magnetic. This is the latest project from long-time Mogwai collaborator and former Long Fin Killie front-man Luke Sutherland. From the off, it is clear why they are a good fit as support act due to the post-rock elements of the sound, although overall it veers more towards shoegaze. You can tell they are a new band – their first single only hit in January – as there is a slight awkwardness to their performance. There are also some issues with the drumming at times. That said, when they hit their stride they are captivating to watch. The band’s half-an-hour set is warmly appreciated by the crowd.

Mogwai take to stage with little fuss, preferring to launch straight into their set with Heard About You Last Night. This turns out to be one of the more chilled out songs of the night. The set unsurprisingly draws heavily from their latest collection Every Country’s Sun. One of the most surprising tracks from that record, Party in The Dark, is also given an airing tonight. It’s surprising in that it is one of the band’s most accessible tracks and features rarely heard Stuart Braithwaite vocals. Interestingly, this is immediately followed by Cody, another track to feature those elusive Braithwaite vocals.

Over the course of the night, there is little in the way of crowd interaction. The most we get is Braithwaite thanking the audience after every song. Initially, it’s endearing but becomes somewhat annoying by the end. Not that the packed out Leith Theatre audience care much. Nor should they as the band are at the top of their musical game tonight. There are several stand out moments, especially an absolutely face-melting performance of Old Poisons, one of several played at the maximum ear-bleeding intensity that people have come to expect from the group.

At end of the exhausting 75-minute regular set the band exit but, of course, return for an encore. Despite only being two songs long, it lasts a further half-an-hour due to them closing with an imperious performance of their 20-minute epic My Father, My King.

Mogwai return to the Leith Theatre again the following night, this time supported by Kathryn Joseph. It is hard to see them topping tonight’s impressive set but you can be sure they will try.