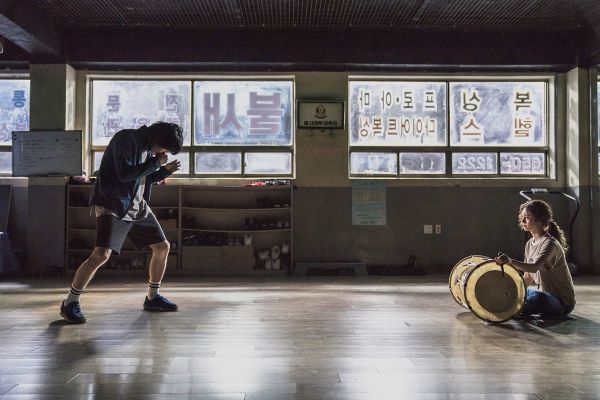 A phrase we’ve all heard and potentially used ourselves, Punch Drunk is the more common term for the medical condition Chronic Traumatic Encephalopathy, a neurodegenerative disease which causes irreparable damage, often as the result of repeated head trauma: a grave concern for boxers.

Allowing the past to provide context, My Punch-Drunk Boxer tells the story of Lee Byung-Gu (Tae-goo Eom), from former boxing star through to his departure from the sport and growing illness. Accused of doping, bringing ill-repute not only to himself but his mentor and practise gym, Byung-Gu now helps out around the struggling boxing pit as a cleaner, towel boy and shadow coacher when able. Upon meeting Min-Ji (Hyeri Lee), his passion to return to the sport returns and he sets out to hopefully repair the damages caused, while promoting Pansori, a rhythmic style set to a drumbeat.

Unsurprisingly, the inclusion of Pansori incorporates rhythmic importance to the film, not only narratively but to seed the vitality of drumbeats and fluid motions of boxing into the film’s structure. It does mean an unwelcome stream of narration is added to the film’s soundtrack as a Pansori storyteller recites verses of what we’re seeing on screen or recaps some of the previous events of Byung-Gu’s life. While inoffensive, the mechanic is only used episodically, but does little else but drive down the pacing of the film and stagger tension or comic timing.

Jung’s way with a dry sense of humour adds authenticity into many of the character’s responses to adversity. As much of the film handles the sensitive matter of Alzheimer’s in the young, the humour thankfully isn’t crass, though it can be over-the-top, and adheres to a character’s traits. Tae-goo Eom’s more fluid movements and awkward moments demonstrate both an understanding of punch drunk syndrome, and a way to physically connect a mental condition with the audience. He never plays his condition for laughs. Instead, Tae-Goo personifies a marvellously created character.

And lordy, what at first presents itself as a budding companionship in its gentile charm is a model of cinematic romance. The chemistry Tae-Goo and Hyeri Lee possess is investible and builds a natural relationship which doesn’t then comprise the entirety of the narrative. Lee absolutely shines as a beacon of enjoyment. Her presence turns bleaker moments to warmth and demonstrates an equal prowess with the choreography as her costars.

Fundamentally raw, without pomp or flash, an earthy choreography drives the fight scenes – though there are few. My Punch-Drunk Boxer isn’t necessarily a sports film, rather a dramatic romantic comedy which centres itself around boxing culture and one man’s desire to make amends. As such, there is little in the way of opulent showboating, no big crowds. What is the focus is the history behind the practices, the precision of the movement and the camera’s ability to capture this (with admittedly a few too many jump cuts and quick edits).

Visually, the film balances, squeezing in the tighter frames as the crowds and narrow lanes of South Korea demand. Kang Min-Woo capitalises on the beaches and more open scenes, and there’s a palate cleanser as the art direction manipulates shadows against the purest of azure skies. It isn’t much, but when the film needs to, it finds a statement shot to carry forward a feeling or a tonal shift, opening up the airwaves from the stuffy gym or concentrated streets.

At its heart though, this film searches for Byung-Gu’s autonomy, and his perseverance to make amends and reclaim a semblance of life. My Punch-Drunk Boxer speaks to a diverse crowd, and ties together multiple genres, stumbling as it brings too much into what are otherwise beautifully stitched scenes. Respectful, humorous and charming, My Punch-Drunk Boxer is a definite for those searching to break from the traditional formula or find a sporting film with a broader scope.

Screened as part of Fantasia Festival 2020