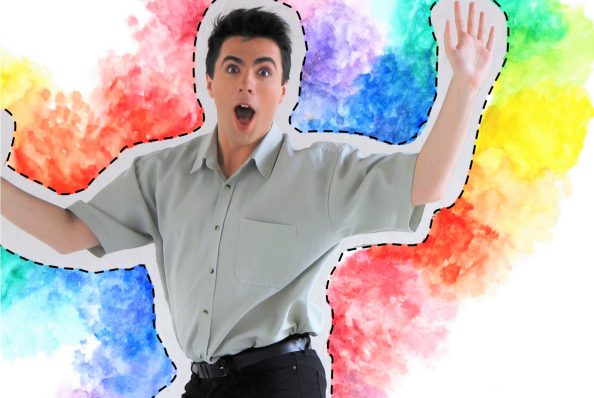 Comic timing is spot on.

Having written, directed, produced and now performing in his play, Paper Dolls, Shaun Nolan brings whole new meaning to the phrase “solo performance”. He brings his debut play to the Fringe with the confidence and calmness of a seasoned performer. It details a challenging period in the life of fictitious Billy, a department-store worker who decides to run as an independent MP candidate. His first policy? To introduce a unisex changing room at his place of work, much to the horror of the locals. From there we follow the challenges he faces and the dilemmas that threaten to derail him on his journey to success.

Parts of the plot seem a little far-fetched. The idea of a unisex changing room causing national outrage doesn’t quite fly and may have been more convincing if Billy’s proposal had been something more genuinely controversial. However, this plot point is almost irrelevant by the end of the play. What it explores, and what the audience cares about, is Billy himself: his attempts to create meaningful change and the bravado with which he tackles his obstacles. He is endearing, funny and admirable.

What makes this work is Nolan. Already an accomplished actor and having had success on YouTube, his writing in Paper Dolls is carefully crafted with a good balance of humour, pathos and pace. It’s a fairly modest piece with no real set and limited props, but Nolan uses what he needs and exploits what he has – a secret bathroom meeting with an election competitor is hilariously captured simply by alternating the position of a handheld torch to switch between characters. We are engaged by the witty throwaway lines, the exaggerated accents and impressions, and the knowing nods at the audience. His comic timing is spot-on and he seems to intuit which lines are landing and then adlib here and there accordingly; at least, his natural performance gives the impression it’s adlibbed.

The narrative is relatively ordinary and maybe there’s nothing particularly experimental or groundbreaking here. Nevertheless, Paper Dolls is an entertaining and uplifting hour of storytelling that deserves to do well and will no doubt bolster Nolan’s promising career.