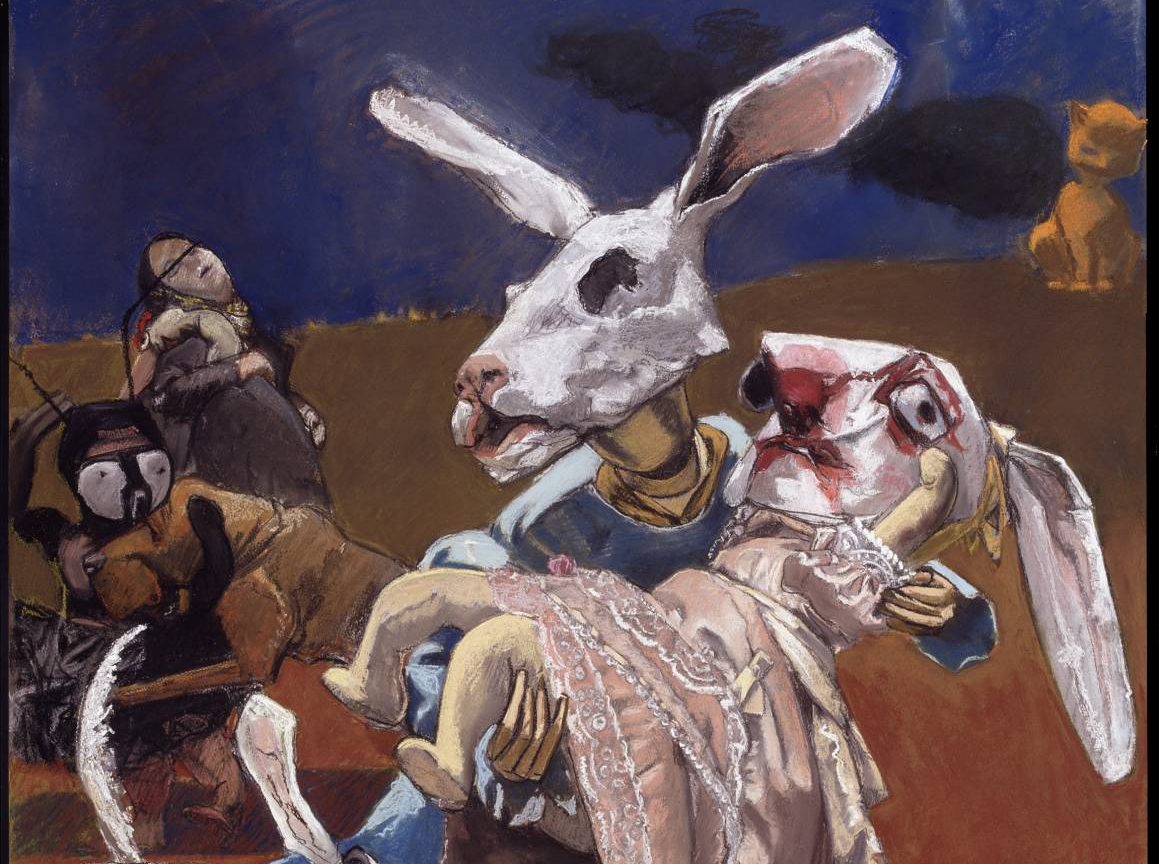 Spanning over fifty years and being the first major retrospective of Paula Rego‘s work in Scotland, Obedience and Defiance is a fierce and arresting exhibition which captures a wide breadth of the visual artist’s practice. Originally from Portugal, Rego studied at the Slade School of Fine Art and was an exhibiting member of the London Group, alongside renowned artists Frank Auerbach and David Hockney. Rego has embarked on an incredibly impressive artistic career; being the first artist-in-residence at the National Gallery in London and who has been awarded both an DBE (The Most Excellent Order of the British Empire) and an RA (Royal Academy).

Rego’s work encompasses abstraction and realism, with a preference for drawings and oil pastels over most other forms. Often working from constructed sets and still life assemblages in her studio, Rego’s work distorts and extrapolates both the uncanny and unnerving. Her expressive mark-making and fiercely expressive gestures capture the emotion of her subject matters. Within the exhibition, many of her rough sketches and drawings feature; providing a unique insight into composition techniques. What originally appear as paintings, soon reveal themselves as heavily layered oil pastel drawings, which boast an invitingly tactile texture. Some of her pieces hint at violence, whilst many explore political undercurrents, betrayals, assasinations and colonial pasts. This exhibition is no exception and is a fiercely raw depiction of recent history.

Downstairs houses a room of earlier works, particularly collage work which she utilised more often in her early days of artmaking. Influenced heavily by Surrealism, but also resisting the anatomically correct training that her painting course emphasised at Slade, Rego later shifted to a semi-abstract style. Many works in Obedience and Defiance adopt this sense of abstraction, which allowed for the use of motifs and signs, particularly within her more political representations. Often utilised within Surrealist works, animals feature heavily in her work and throughout the exhibition. Small mutant creatures in the corner frames and masked human bodies create both a compelling and disturbing sense within the rooms.

The exhibition has an impressive breadth and insight to her work, particularly given her creative practice has always encompassed a distinctly feminist and often critical stance; her paintings being advocates for abortion rights and against female genital mutilation practices. Within Obedience and Defiance, there is a room filled with depictions representing these acts and they are truly haunting. Single figures against dark, sparse backgrounds; small curled up bodies, haunting and illuminating eyes all tell stories of female tragedy. As opposed to creating gruesome and blood thirsty images depicting abortions and mutilation, Rego instead captures her female subjects as themselves, as individuals in a room. She captures them between the emotionally tolling processes and it is these works that truly capture Rego’s essence and humanity. Her striking compositions and deep colour palette illuminate the emotional turmoil and journeys that these individuals are or have embarked on, with true artistic compassion.