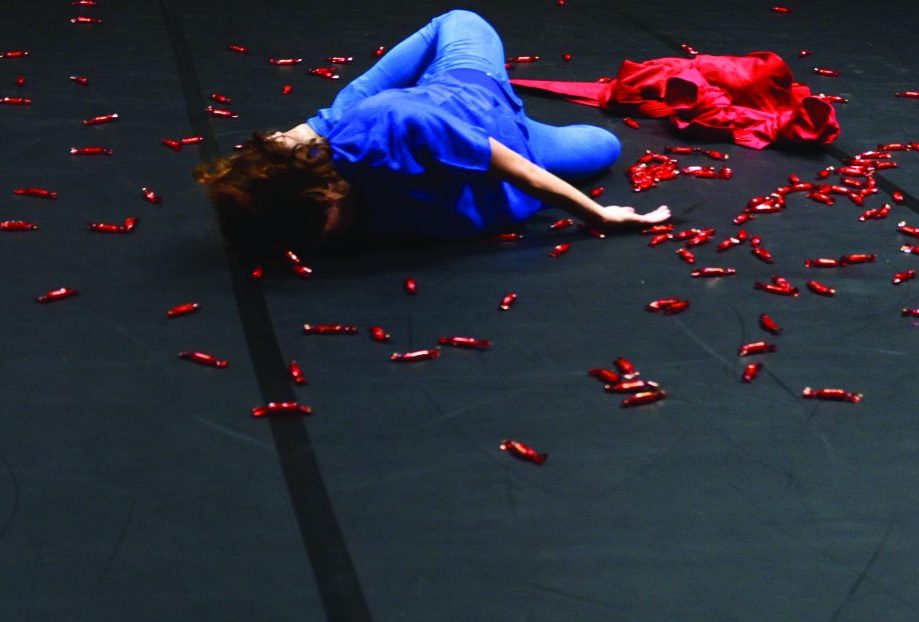 The Manipulate Visual Theatre Festival is an annual event at the Traverse Theatre in Edinburgh, with a handful of performances in various other theatres across the UK. The festival is organised by Puppet Animation Scotland and presents an array of international performances, animated films and physical theatre shows. Tonight the audience in Edinburgh is being treated to a double bill with PeurBleue & Don’t Be Afraid being performed within the main performance space of the Traverse Theatre.

C&C Company are an Italian troupe who have presented their work in Edinburgh on several occasions. Tristissimo was performed at Manipulate in 2015, meanwhile Maria Addolarata was a big hit at the Fringe in 2014. Tonight they begin with PeurBleue. The inspiration behind the piece is the French book Une Histoire de Bleu, by Jean-Michel Maulpoix. Despite the references to the colour blue, PeurBleue begins with solo performer Chiara Taviani wearing a red coat and bathed in a blood red light. It is a haunting image that kick starts the 50 minute performance in a bleak, but intriguing style. The show is a curious physical performance, where unease, turmoil and confusion is shown through anxious movement, evocative lighting and striking sound design. The performer interacts with dark red props and presents an image of domestic life, that is until the show takes a bizarre and unpredictable twist. We are introduced to new colours and a hypnotic and repetitive monologue which underlines the themes of PeurBleue and fully expresses the talents of Chiara Taviani and C&C Company.

After a brief interval the audience get the opportunity to experience Don’t Be Afraid. This time Carlo Massari takes centre stage with another one person physical performance. Don’t Be Afraid tackles similar themes to the evening’s previous show, with anxiety and confusion being depicted. Here these themes feel more explicit. A stark white colour scheme is used along with bright and bold lightning. This imagery then becomes distorted by the introduction of darkness, the spoken word and agitated physical theatre. Massari gives an exhausting and courageous performance and uses his body and a variety of props to convey fear and comedy with brilliant and memorable results. PeurBleue & Don’t Be Afraid are a great pairing and show that C&C are a company with many fantastic ideas. They also have the ambition and talent to make these ideas a distorted and absorbing reality.