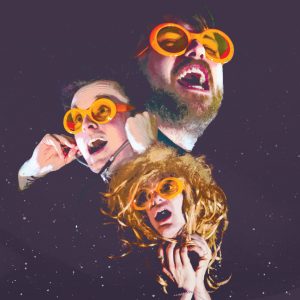 Policemen edging to get in each other’s pants, microscopic audience members, self-aware props and lashings of sweat – It could only mean a sketch comedy show! Edinburgh’s most prominent home-grown comedy trio Planet Caramel offer a set featuring quick-fire sketches and blasts of surrealist humour. Veterans of the Edinburgh Revue, the group try to abide by a rule that their sketches are over in under a minute, constantly keeping each member on their toes.

Rotations in Flavour Space introduces us to the three members as soon as we enter, suggestively dancing with masks of each other strapped to the back of their heads. Alex, Richard and David go through the bizarre motions of showcasing the aptitudes and drawbacks of each performer before breaking into their sketches. The stage gives off the aura of a child’s messy playroom, with colourful toys and props littered across the sticky floor. There’s a juvenile quality in each of the performers and even when it’s their turn to play the straight man, they have this intrinsic silliness about them that doesn’t get tiresome.

When there are three dudes in a room trying to work out what material to perform, the performance can sometimes find itself having a huge reliance on homoerotic content. Rotations has a lot of gay jokes that seem to come out of nowhere, like a skit about a donut that forces to you kiss other men. This is explained to a degree that is a little underwhelming, the deconstruction and occasional call-backs nullifying the impact of the joke. If you are going to do gay jokes, at least go for it without hestitating because of audience expectations.

Some of the sketches manage to recapture some of that improv magic that is near impossible to bottle. None of them fall particularly flat and the breaks in changing over the set are genuinely creative and flawless at holding the momentum. To nail every sketch in an hour long show is a big ask. The lulls and dropped punchlines are few and far between but they do highlight how Planet Caramel’s punchy style is better suited for shows and sets with a shorter runtime. Rotations remains a fun and enigmatic show that pushes things in the right direction for sketch comedy – late night alt-comedy tomfoolery with a likeable cast.