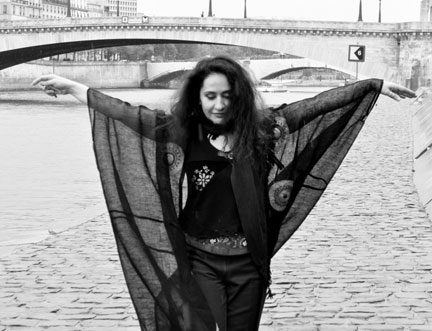 Both Raja Alem and Abir Mukherjee’s new crime novels begin with a dead body, but go on to explore two very different cities. Seasoned writer Alem explores Mecca’s ongoing modernisation in The Dove’s Necklace, what she calls an “elegy” to her home city’s rich past whilst also looking forward. Mukherjee’s debut novel examines a similarly transitional period in Calcutta. Set at the beginning of the British colonial period, A Rising Man explores the clash between cultures that was also the driving force behind the Bengali Renaissance.

Despite being at different points in their careers, Alem and Mukherjee share similar writing experiences at the Edinburgh International Book Festival. Mukherjee cites Stephen King’s assertion that writing is like uncovering a fossil. The story is not the writers’, but something already existing. Alem agrees, comparing writing to exploring the streets of Mecca. “They tricked me,” she exclaims of her characters. Both writers concur that characters can be unruly, and take on a life of their own.

Mukherjee has somewhat atypical origins for a writer. Originally an accountant, this is the first time that he has completed more than a chapter. He describes an “itch” that he had to “understand a period in history”. In the classroom, he explains, we are not taught British colonialism’s full story. We hear of it only through “rose-tinted spectacles” or in a wholly “black” hue. Neither are true, according to Mukherjee. He recounts learning history at school but then hearing a new side to each story from his immigrant parents. He learnt from a young age to not trust truth, and to appreciate how two cultures can complement each other whilst also being at loggerheads.

Alem is the first woman to have won the International Prize for Arabic Fiction and, she wryly says, “the last”. Yet she too challenges preconceptions about her country. When asked if she hopes her book will inspire women to protest she retorts, “Women are doing it themselves – they do need my book to help them”. She describes women owning small businesses and supporting their families, but “we do it all behind the black”. The future is optimistic for women in Mecca, to which she attributes a special “feminine energy”.

Both writers have been inspired by a rich array of authors. Mukherjee cites the UK’s crime writing scene, especially Scotland’s social commentary. He, like Ian Rankin, believes that a policeman can bring a unique insight into all levels of society. Alem describes growing up in Saudi Arabia’s rigid culture before being exposed to the West, an experience that she explores in her book. Charles Dickens and D.H. Lawrence helped her find treasures in her own culture whilst also revealing the contradictions inside her mind. “I love books,” she says. No one in the audience would disagree.