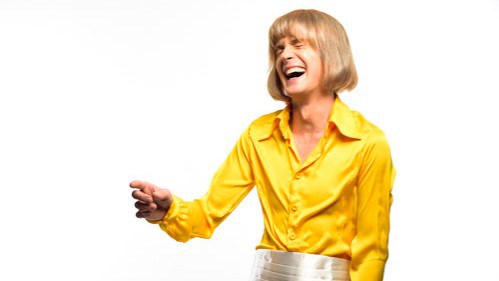 Richard Carpenter is Close To You

Someone chose to put this comedy cabaret piece in the theatre section of the programme. While that might be a good strategy to get a crossover audience, it also might explain the early walk-out this evening. For this is no straight bio of the overshadowed Carpenter brother, but an affectionate flight of fancy on what it might be like to be the “wrong” half of celebrity siblings.

Matthew Floyd Jones, half of Frisky & Mannish, plays Richard in limbo in “Purgatorium”,  a twilight place populated by the lesser siblings of the entertainment industry and his own personal demons. Life involves endless ceremonies honouring his late sister, humiliating stints on cable television and no-one giving a monkey’s about his solo career. It toys with reality.

Only a hardline megafan (or maybe Carpenter’s long-term therapist) would fail to see the funny side of this. It’s a canny way to frame the story, and Floyd Jones brings the imagined Carpenter vividly to life, from his blonde mop down to his platform shoes. He works for it too, scurrying around the stage playing multiple instruments and jabbering to the point of breakdown. When Carpenter finally reveals the new sound he’s been promising, it is quite something to behold. “I’ve broken something,” he calls out after an audacious dance move, and for a moment you think he might have done.

Ironically, the music is a weak spot. In the opening sequence, Carpenter plays the duo’s hits how he’d have sung them – same tunes, altered lyrics. The silly lines are meant to be comically rubbish, but end up closer to rubbish comedy. Long rambling sections affect the dynamic too. At one point, he appears to be freestyling a rant to a reporter about Marilyn Monroe which could be tightened with no loss of impact. Some of the ideas here run away with themselves, in need of a stronger, central story arc to bind to.

Otherwise, there’s lots to enjoy about this nostalgic labour of love. Richard gets his resolution in a sweet final sequence where he meets another second-fiddle sibling, and as the Fringe gets going and audiences warm up, this will develop into a joyous closer. It’s just those wanting actual documentary or faithful musical tribute that will be disappointed.