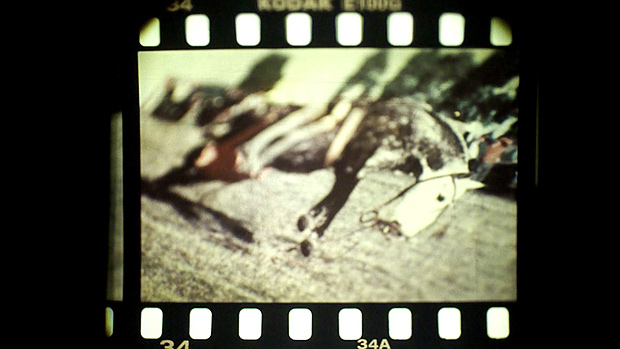 [rating:2/5] An alienating film that raises far more questions than it attempts to answer.

Zorro was a champion rodeo horse, celebrated across the South American circuit for being unconquerable by even the strongest riders. Through a series of interviews and archive footage of Zorro, director Juan Ignacio Domínguez explores the horse’s life through the men who rode him.

Domínguez has compensated well for limited and low quality archive footage of Zorro by turning sequences into moving pieces of art, but not to such a profound extent that it justifies the film’s other failings. The whole thing has an air of incompetence about it; the subtitles are littered with spelling and grammatical errors meaning that too much time is wasted wondering what a ‘corse’ is (it’s a horse), the poor recording quality of the interviews is distracting both visually and aurally, and the unexplained horse-related jargon will alienate most viewers. No effort is made to give the story any context or to explain who the interviewees are, which creates an inevitable lack of interest among the shrinking audience. The over-explanation of the fatal injuries sustained by one rider – without giving any background to him as a fellow human being – is disrespectful at best and perverse at worst. This film raises far more questions that it makes any attempt to answer, and fails to enthuse enough passion to bother finding out afterwards.