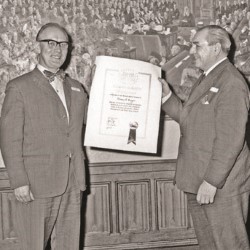 Rodgers with a 'D' - The Tommy Rodgers Centenary Celebration

This is a pleasant, morning storytelling show – a piece of personal, family testimony that brings in aspects of social and cultural history and a little local flavour.

Louise Rodgers, a musician by background (Messiaen is her speciality), is a newcomer to this kind of performance. She’s done a brief stand-up course and an open mic slot at The Stand, but this storytelling show has a specific purpose – to remember her late father, Tommy, on his centenary. She has travelled the world  giving talks on Messiaen; so why not now focus on her own Dad?

Why not indeed? Although the anecdotes are personal and specific, they do work as an illustration of an entire generation, a generation Rodgers speaks so respectfully of. Growing up during the 20s and 30s, her father needed a doctor the family couldn’t afford. This was after an ill-advised attempt to jump the Union Canal resulted in a gashed leg. It’s an amusing story in itself, but a reminder of how life was without the safety net of the NHS. Her father’s side were penniless Irish immigrants, Gaelic speakers, and the tensions that they felt in Protestant Broxburn and with their eventual in-laws (Louise’s paternal great-grandfather was a proud Tory who would walk down Broxburn High Street to wind people up) is a reminder of the culture clashes that shape Scotland today. She also points out how a poor boy, who never ventured further than 8 miles from Broxburn until he left school, was watching a man walk on the moon by the time he was 50. That reminder of just how much the world changed in the first half of the last century is powerful.

We don’t get a very strong mental image of Mr Rodgers, but from what we do glean, he comes across as a kind, occasionally cheeky fella who made up nursery rhymes for his daughter, used to do comedy plainchant as an altar boy and liked his toilet humour – he’d prank his mates in the latrines during the war. He also lived by what he felt was right. As a boy, he’d do the tattie-picking in the fields because the back-breaking ‘woman’s work’ shouldn’t be left to women like his mother and sister. In adulthood he went into health and safety to make sure fewer people lost life and limb in industrial accidents.

His story stops in mid-adulthood. Louise has already explained that she effectively lost her father when her mother died in 1977, even though he lived into the new millennium. It puts a certain sadness over proceedings, but doesn’t spoil the mood. This is a cosy, informal affair where we’re invited to chat afterwards. In this audience, a couple had parents of a similar generation and are able to concur on a lot of points. “You’ve done your Dad proud,” says one chap. On that, everyone can concur.

This show is a charity show, raising money for the Water of Leith Conversation Trust