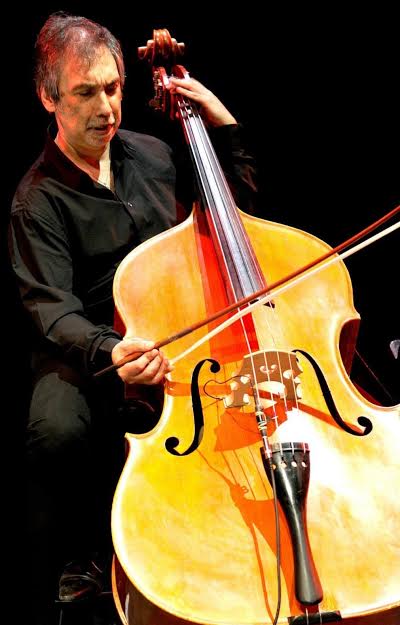 A passionate talk about Roma history, followed by a solo double bass performance of folk and original pieces.

In the atmospheric setting of the chapel of St John’s Church, Michael Cretu, an internationally acclaimed double bassist and composer, gives a passionate talk about the history of the Roma, followed by a recital of some folk and contemporary pieces.

Cretu comes from a 300-year-old family tradition of musicians and it is through the experiences of their lives that we see the course of history of the Roma people.

The story begins in the period of slavery which started in the 13th century and lasted until its abolition in the middle of the 19th century, and affected the life of his ancestors. Many Romani who were used as agricultural workers were admired for their musical talents and asked to play in front of a public, which was a way for them to consolidate their playing ability to a professional level.

Showing a series of photographs and sharing testimonies, Cretu illustrates the importance of music in Roma tradition, describing the main instruments which are played. He tells anecdotes about his ancestor Petrea Cretu, the violinist of the city of Braila, who had a wide knowledge of Roma folk music. And he continues to talk about the history of Roma people through the experiences of his father, a well known pianist, and of his uncle, a double bassist and composer, considered the father of the Roma jazz.

During the talk the Roma Holocaust, carried out by Nazi Germany, is pictured in the deeply moving video testimonial of Roma people talking about the horrific experience they suffered – the concentration camps, the deportation hidden behind the promise of better life prospects, and the consequent tragedy that resulted in the deaths of more than 500.000.

The talk is followed by a recital in which Cretu enchants with his passionate playing. He gives a hint of the different influences on the Roma musical tradition with a folk tune of Ottoman origin and another that derives from Greece. Then he adds his personal colour and sound to a Charlie Parker jazz standard, and he ends with two original compositions in which the echoes of the Roma tradition sound brilliantly in every note.

Cretu’s elegant and passionate mastery of the double bass, paired with the sentiment expressed during the talk, makes the moment a profound and rich testimony of the Roma history and culture.