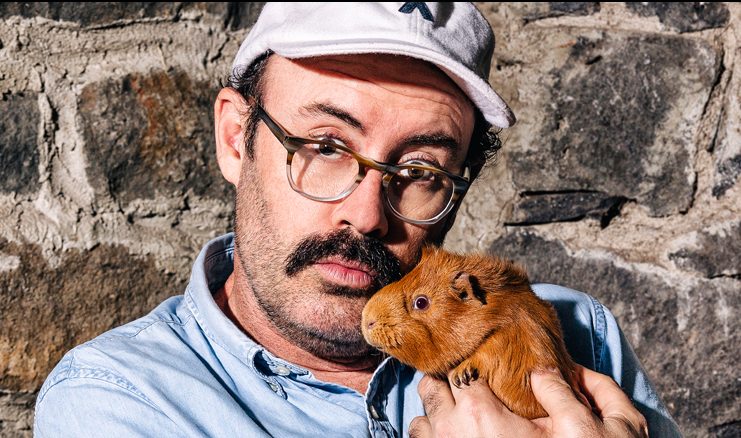 A masterclass in silliness from former winner of the big one.

Fringe regular Sam Simmons returns to Edinburgh with his new show A-K in what is another ridiculous hour of absurd observation and disjointed thoughts.

Anyone looking for a straight narrative might prefer a conversation with someone with a concussion. Sam Simmons sets you up and always manages to deliver something completely unexpected. There are so many distractions, asides and aired internal criticisms that the audience is captive in a state of continuous uncertainty.

A joke or observation that isn’t immediately well received is met with a simple “F*ck off” and an admittedly hungover Simmons berates himself and his show’s narrative regularly throughout as if constantly battling a fierce internal critic. Yet, this isn’t Simmons’ first rodeo and he knows how to use awkwardness, silence, and people just not getting him as props to perfect comedic effect.

A-K is essentially a pot-bellied, skulletted cheerleader reading a phone book, talking about his family, musing about the 16th – 18th century and telling far-fetched stories starring Richard Dreyfuss and Willem Dafoe. There is much more, of course, but it would be pointless to chart what at times feels like a stream of semi-consciousness comedy. The pace of the show occasionally grinds to a halt while Simmons glares at members of the audience and there are times when the show feels unscripted and Simmons is thinking on his feet. Yet, these breaks in flow work as they build into bigger laughs. It is quite something to behold.

There are flashes of Python and Andy Kaufman but what Simmons does is truly unique. He is an awkward fit with the conventional comedy world, but has managed successful appearances on traditional shows like Live at the Apollo, 8 Out of 10 Cats Does Countdown and Room 101. It is refreshing that there are TV bosses out there that are brave enough to gamble on something absurd and surreal because the world needs more from Sam Simmons.