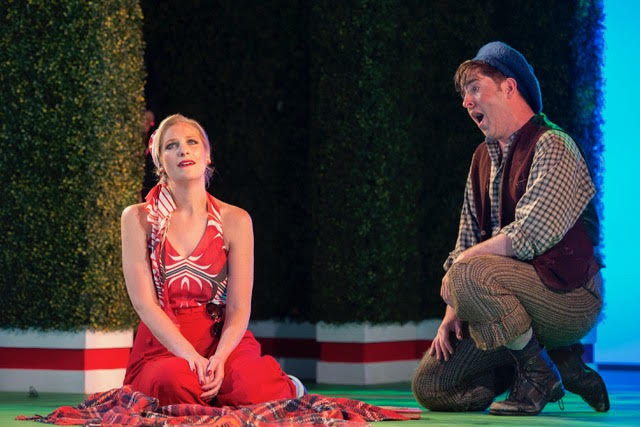 The Elixir of Love

In the 19th century, my hometown of Kilmarnock (which I left at the age of 16) was a prosperous industrial town and the local burghers in the style of the period built themselves an opera house! All that remains now is a plaque on the wall of council offices in John Finnie Street, but last Saturday saw opera returning to Kilmarnock in the shape of Scottish Opera’s touring company at the nicely restored Palace Theatre.

The idea of the touring opera company is to take opera out to the country beyond the cities where Scottish Opera performs with its full company. In the words of Dulcumara, one of the characters in Elixir, “we have come to visit the yokels!” The company is small, with ten singers and eight musicians, but with some minimalist scenery and the wonderful music of Donizetti they transport the 300 strong audience into the world of 19th century bel canto opera and get a great reception.

Elixir was Pavarotti’s favourite opera. He played the village simpleton Nemorino and had some lovely arias to sing. I remember him with his characteristic white handkerchief at Covent Garden singing Una Furtiva Lagrima. Nemorino is in love with Adina, the village beauty, and takes an elixir sold by a travelling conman, Dulcumara, to help him win her over. After much confusion and anguish and lots of wonderful music all ends happily.

Scottish Opera’s Nemorino – a young Welsh tenor, Elgan Lyr Thomas – isn’t quite up to Pavarotti standards but sings his big arias decently. Although, to be truthful, they don’t sound quite as good in English (with the occasional Scottish phrase thrown in!) as in the original Italian. However, without the ability to transport subtitles, Scottish Opera want to keep the operas accessible and Elixir is a great, fun opera which truly engages the audience in its humour.

This is particularly brought home by the star of the evening, James Cleverton as Dulcamara. He enters the theatre on a bike with his medicine on his back, cycling down the aisle, and regularly plays to and among the audience. Cleverton is not only a fine singer but a good comic actor and is already making a name for himself in London opera circles. Adina, the heroine, played by Ellie Laugharne, sings very sweetly and the rest of the cast and small chorus work hard at creating the atmosphere and the fun.

The audience loves it and hopefully Scottish Opera will continue to bring opera to Kilmarnock. The company are to be commended for taking opera out to the people.