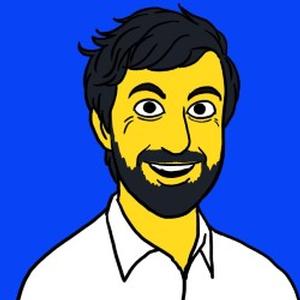 The Simpsons Taught Me Everything I Know

A nostalgic and amusing homage to the greatest TV show ever created.

Hands up who enjoyed a misspent youth glued to their TV sets watching The Simpsons? Those who did might want to head along to the Voodoo Rooms to gauge their level of nerdiness against Yianni Agisilaou, who purports to have learned everything he knows from the show.

Formerly a “law talking man”, Agisilaou set fire to his briefcase in Australia 13 years ago and moved to the UK, where he’s been performing stand-up at the Fringe for the past few years. This time, he’s brought his childhood (and adulthood) obsession along with him to highlight little-known Simpsons trivia, draw amusing parallels between Springfield and the real world and regale the audience with humorous anecdotes from his own past.

Agisilaou has clearly spent much time creating the show (although nowhere near as much time as in researching it) and he does make some insightful comments about how The Simpsons lampooned the political crises of today before we were even aware that they existed, as well as doling out a few illuminating facts behind its inspiration and creation.

The most interesting of these titbits pertain to how The Simpsons ‘borrowed’ much of its material from sources which came before, thus achieving excellence in the guise of ‘parody’ and ‘reference’. Agisilaou readily admits that he has done exactly the same thing with his show – calling it a homage to Homer – but even though his acknowledgement comes in the first few minutes and is reinforced later on, it doesn’t make it any less true.

When all’s said and done, Agisilaou has piggy-backed on one of the most successful TV shows to create his own contribution to the Fringe. Though he does make some incisive remarks and he’s a natural when it comes to performing and interacting with the crowd, there is minimal original content in the show. Regardless, Simpsons’ fans will undoubtedly enjoy his romp through the ‘Golden Age’ of The Simpsons (seasons two to nine, if you’re interested), if only to see how their own knowledge of the show measures up.