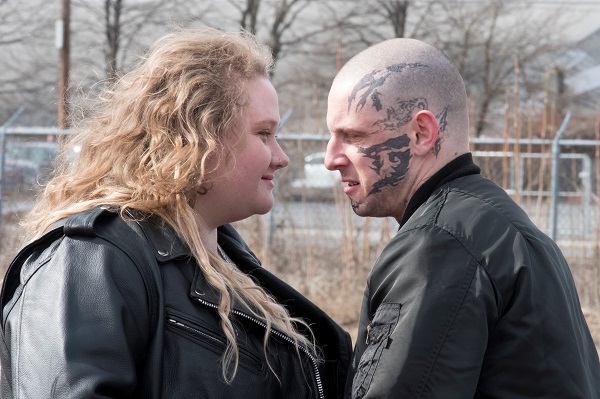 A gritty true-life tale of a young man who attempts to haul himself out of a life of hate gives the versatile Jamie Bell a chance to play one of his most indelible roles.  As a man literally no longer comfortable in his skin due to his face and body being covered in White Power tattoos, Bell makes a rather standard and simplistic redemptive arc into something watchable and, like his character, finds a deeper humanity beneath the surface as he painstakingly undergoes excruciating laser surgery.

Bryon Widner (Bell) is a long-term member of the Vindlanders Social Club, run by Fred (Bill Camp), who inducts down-on-their-luck young people into his gang by offering food and shelter, while drip-feeding racist bile into their ears.  At some point we first meet him he’s already beginning to question his membership of the organisation.  This self-examination intensifies when he falls for Julie (Danielle Macdonald), a tough mother of three who has cut her ties with the Nazi ideology.  When he sees a new recruit go through the same process as he did he starts to look for ways to get out.

Bryon’s journey is intercut with intense scenes of his tattoo removal.  The brutality of the scenes appears to be the closest writer and director Guy Nattiv comes to depicting any penance for Bryon’s past.  He is already seen to be visibly uncomfortable in the presence of Fred and the others in the gang, and Nattiv is careful that he isn’t presented as being part of the horrendous acts of violence that occur.  As with Edward Norton‘s Derek Vinyard in American History X (a comparison that can’t help but be made) his ideological rehabilitation seems a too easy, requiring nothing more than the love of a good woman.

On the positive side, Skin is much more convincing in showing how vulnerable young people could get sucked into the Neo-Nazi life.  Fred offers an ersatz family and more security than they’ve had for a long time, if ever.  His wife Shareen (Vera Farmiga) is Den Mother, a hippy-ish type with a placid facade.  Her attentions towards the wayward young men they’ve adopted subtly and creepily hint that the affection she shows them may be more than just maternal.  For Bryon and the other Vindlanders, the facial tattoos are symbols of affiliation and comradeship.  Of course, they’re more like brands provided by Fred so he can identify his cattle.  These markings compound their outsider status and make them more socially and financially reliant on their benefactor.

White Supremacist creed of the type shown in Skin now seems like a caveman relation of the sharply-presented, social-media savvy and altogether more insidious alt-right, even though only fifteen years have passed. As such, besides Bell’s extraordinary performance and the rough chemistry he shares with Macdonald’s Julie, it’s not an easy film to recommend.  It’s hard to see who the target audience would be.  The message is too simplistic, too skin-deep to convince anyone with deep-rooted hatred and the point it makes about redemption doesn’t even need to be made to anyone else.  It’s politics are crude, it’s presentation simplistic.  Bell is hypnotic and draws empathy, but he’s never allowed to sink too deep in the mire before he claws his way out.