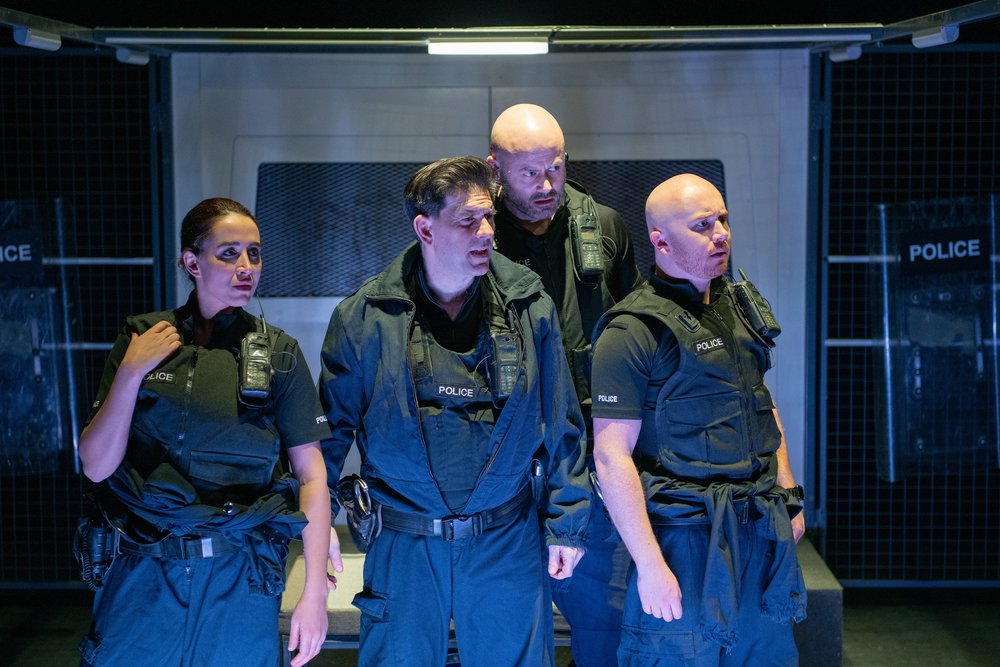 Immersive drama offers an authentic portrayal of policing in Scotland

The adage ‘Write What You Know’ is attributed to Mark Twain and fits Adam McNamara’s play Stand By perfectly. Writer and performer McNamara spent several years in the police force, which is evident in his tense seventy-five-minute drama offering an authentic portrayal of police waiting to act.

As the audience enters we are handed an earpiece that bombards us with a litany of misdemeanours that police officers hear – a racing car, bestiality in a graveyard – which are responded to with a repetitive ‘Yes’. Although this refrain fades as the actors arrive, bored, called out to a dispute which may turn violent, it has made us alive to the idiocy of the public. As Directors Joe Douglas and Jo Rush hoped, the earpieces ‘break down the “them and us” mentality’.

McNamara creates diverse characters; he is excellent as Chris, the crew leader whose home life is falling apart, while Laurie Scott – the mini-me version of McNamara – irritates with his English accent and the boasts of his sexual exploits. Andy Clark is the seasoned veteran eagerly garnering cash, while Nalini Chetty’s Morticia is tough but gentle, questioning the prejudices and insensitivities that the others display. They are united by their disdain for a public who demands that the police deal with their acts of stupidity while simultaneously being confronted with dead bodies and physical danger. A description that stays is that of putrefied remains rotting in a flat, which Chris and Morticia had to remove.

Natalie Jenkins’ set is spare but versatile. A few benches and flats represent a van; a van that expands so actors – donning riot shields and helmets – can reconstruct situations, allowing the audience to visualise the discipline required to keep order. Throughout we are immersed in the Scotland of bigotry, housing estates, RTAs and Orange Marches, with the tension erupting as the team force Chris to make the decision to try to stop a siege.

A timely production, Stand By supplies an antidote to recurring accusations against the police by clearly illustrating the dedication and pressures of policing today.  Allegedly, police series are the most popular television programme. As rumours circulate that McNamara is writing one himself, his knowledge of policing and ability to both root for the police while showing the force’s dark underbelly suggest his could be a series worth watching.