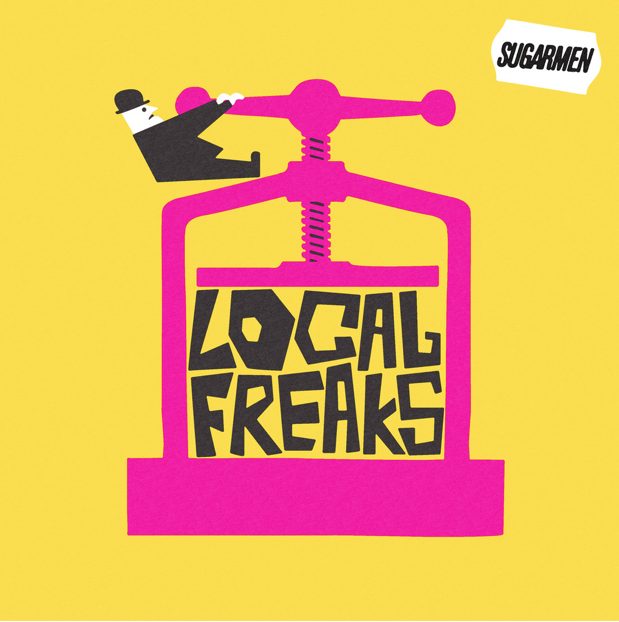 Liverpudlians debut a sugar rush which doesn't quite last.

Already boasting a rather staggering repertoire as support for the likes of Blur, The Who and Paul Weller; there are expectant sights directed towards fresh Liverpudlian band Sugarmen. Aloof with both classic rock ‘n’ roll and modern indie references, their debut album Local Freaks is energetic yet still a little zestless. It’s a shame what baggage comes with the phrase ‘British rock ‘n’ roll’…

Kicking off the record with underground tensions, bursts of bright guitar solos and rapid tempo accelerations, the opening track AC seems to embody the generic theme of the looming album. 70s rock vibes given a modern revival – almost Bowie-esque – it is nevertheless an enticing start. SOLD thereafter surges forthwith, this time swaying into a kind of hard-country rock, not too dissimilar to the sound of alternative Kentucky giants Cage the Elephant.

Chay Heney’s catchy yet rather repetitive guitar riffs and frequent mini-solos ensue through the album. The bass line (played by Tom Shields) frequently pumps through the melody, which is effectively directing for the listener, however Sam McVann seems to be a fan of synchronous drum beats and fills, which isn’t as enthralling.

Such tracks as Thunder in the Foothills and Time ensure an energetic mid-section; a frequent downfall, and not merely for first-time album creators. Signature thrashing and urgent indie rock vibes of the past two decades recall The Libertines with the distorted and, at times, slightly un-harmonious, out-of-sync sound. Even Luke Fenlon’s huskily soothing voice narrating youthful swagger is very reminiscent of Pete Doherty. However, the constant tempo manipulation does unsettle the listener. Golden One is a punchy rally of a song – provocative and stimulating – before proclaiming ‘slow down’, which the listener doesn’t really expect or want. The fast musical pulse demonstrates Sugarmen’s sparking passion, but it almost verges on rushing to finish the songs as quickly as possible; which ultimately isn’t helped by the album’s relatively short track lengths.

On reflection, a relatively satisfying indie reveal for a young band. Speckled with great musical influence, it now calls for more honing of an individual sound for Sugarmen. But one would hope this will come with further album ventures in the future.