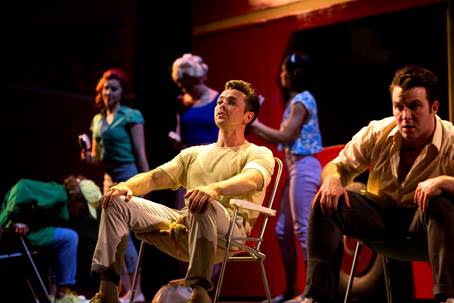 This touring production pairs excellent choreography with a childish script.

Don't expect too much

Based on the classic 1963 Elstree cinematic ‘vehicle’ for Cliff Richard and The Shadows – who were no doubt still trying to live down Expresso Bongo at the time –Summer Holiday at the Edinburgh Playhouse is a cheap-as-chips touring version of the hit 1996 show. Despite the uninspired set design and off-the-peg costumes, the production boasts an exuberant cast and has paired them with excellent and energetic choreography.

Rather than evoking any form of sixties zeitgeist, this production chooses to reinterpret the era as it would like it to have been. The cast sing and dance their way enthusiastically through almost the entirety of Sir Cliff’s early song book, in a script that – to be brutally honest – sounds like it’s been written by a 12-year-old, whilst also featuring jokes that would make an aged Christmas cracker blush.

Dancing on Ice’s Ray Quinn takes the lead and makes up for his slightly-nasal singing with some amazing footwork. Meanwhile, former Opportunity Knocks winner and general all-rounder, Bobby Crush, provides almost embarrassing comic relief to the main action. The only real acting talent on this stage is West End regular Taryn Sudding, though this is compensated by some exceptional performances by the young dancers and singers featured. Out of all the creative team members behind this production, Racky Plews must be congratulated for her imaginative choreography and original staging.

Forgive this grumpy old reviewer for considering the whole thing puerile – he seemingly being the sole member of the predominantly-elderly audience who failed to enjoy the performance. For everyone else, who found themselves continuously stamping their feet and singing along to the barrage of hit songs, Summer Holiday appears to be a hit. That said, when they gave the cast a standing ovation at the end, it wouldn’t be surprising it they were just happy for it to be over, with the musical featuring what must be the longest finale in musical theatre.

As song-and-dance stage adaptations of iconic film scripts go, it’s no Sunset Boulevard, but, to paraphrase Flight of the Conchords, it’s great fun if you don’t expect too much.