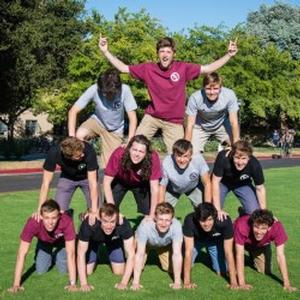 The Techtonics: Don't Push the Button

What a cappella should be with a full scale production of singing, comedy and dance

Earlier this year this group of science and medicine students from Imperial College London traded studies for songs and lifted the prestigious International Championship of Collegiate A Cappella – the first UK based group ever to do so. News of their fame has obviously spread across the streets of Edinburgh as the recently crowned champions pack out the SpaceTriplex venue.

They are well rehearsed, well harmonised, well choreographed and well… very good. The group base their songs around a loose storyline, that of a big red button that speaks to the ensemble from above, warning them not to press the button, lest the the same fate should befall them that met former Techtonic, James. It is good fun and in the spirit of the Fringe, if a little cheesy and forced.

The song choices range from classics by The Beatles and Queen to comedy numbers like I’m Too Sexy. Perhaps most impressive of all is when bass, Alex Moore, finds his falsetto for a startling rendition of The Darkness favourite, I Believe In A Thing Called Love.

There is poignancy too when ex-members of The Techtonics are invited onto the stage to sing to the four departing members who, although sad at their imminent departure, must be thrilled to have finished their time with the singing scientists as world champions and with a resounding success of an Edinburgh Fringe show.

Part of the Techtonics’ success is innovative sketches like that of the Pokemon battle between the members, which is relevant both in the here and now, and in the memories of many who remember the bizarre creatures the first time round. Using your voice to one moment sing a stirring ballad then seconds later have your audience laughing hysterically is no mean feat.

What really sets the Techtonics apart from other a cappella bands though is the staging. This is a full scale production, rather than just song after song, and credit has to go to choreographer, Roshani Abbey, for pulling it together. It is no surprise they are champions and their standing ovation is thoroughly deserved.