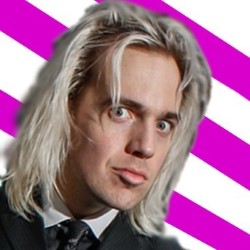 Insult comedy at its finest.

"Not for the faint of heart"

Having taken morbid inspiration from the deaths of his best friend and his father for Fringe shows in previous years, John Robertson’s distinctly uneventful twelve months have led him to ponder the appeal of a mainstream arena show. Unfortunately, his budget only stretches to a 45-seater auditorium, a TV which doesn’t work and homemade decorations that he himself confesses look like the handiwork of a disabled child.

In lieu of the promised arena show, then, Robertson bombards his audience with Arena Spectacular!, a 55-minute long tirade against comedy, life and anyone in the crowd who happens to get in his eyeline. For those uncomfortable with aggressive audience interaction, it might be best to give Robertson a very wide berth, but if you’re okay with being berated mercilessly for the duration of the show, it’s a hilarious way to spend an afternoon. Best leave your 16-year-old offspring at home though – as one hapless mother-son duo found out to his everlasting and excruciating embarrassment.

Prudes should also beware, since Robertson admits openly and early on in the show that he is an incorrigible pervert, backing up such a claim with a long anecdote about his adventures in a London sex dungeon. Elsewhere, he touches on his lack of fame in his native Australia, his disdain for American comedians and the pressures of bringing a show to Edinburgh. Mostly, though, it’s all about skewering the audience with supreme skill.

The final five minutes of the act are given over to rescuing his mainstream show, complete with microphone, sparkly apparel and a big musical number more appropriate to an arena setting. It’s an engaging conclusion to the show and wraps things up nicely, but he’s at the height of his powers when he concentrates fully on seeing into the souls of his audience and then butchering them in front of everyone else. Not for the faint of heart.