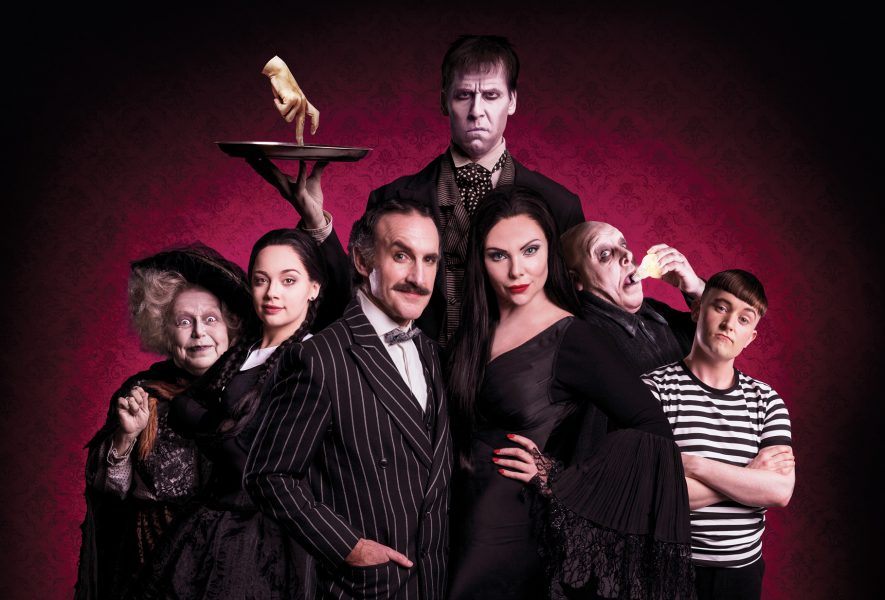 Everyone’s family is weird. There is no “normal”, or rather, each family has their interpretation of “normal”. We now accept that a family unit comes in all shapes and sizes and maybe “normal” is the new “weird”. The Addams Family is based on the mid-20th century cartoons of Charles Addams for the New Yorker magazine, which were then made famous by the television series and a couple of Hollywood films of the same name. At first glance, the Addams family are not normal, but dig a little deeper and all the ingredients are there, it’s just that visually and habitually, they are more open about their quirks than most families.

The premise for this piece of musical theatre, directed by Matthew White, is that daughter Wednesday has now met and fallen in love with a Muggle, sorry, Mid-Western “normal” boy Lucas and has arranged a meeting of the parents in order to introduce everyone. Initially, Wednesday (played by the multi-talented Carrie Hope Fletcher) expresses the desire for her family to change, to appear more normal, but it transpires the family of her fiancé need to change, and everyone has lessons to learn about love, acceptance and trust.

Samantha Womack plays Morticia – which is a far cry from her last stage role in Edinburgh, that of Nellie Forbush in South Pacific – with poise and smouldering elegance. Her husband Gomez is played with deft humour by Cameron Blakely. Valda Aviks channels Hogwarts’ Professor Sprout in her portrayal of Grandma, but to be fair, Grandma came first. Grant McIntyre’s Pugsley is hugely enjoyable as the not-so repressed little brother. Potential in-laws, the Beinekes (Dale Rapley and Charlotte Page) seem to be a grown-up Brad and Janet revisiting the mock-goth of their Rocky Horror days; their son, Lucas (Oliver Ormson) developing a healthy interest in the macabre. The ensemble (corps de ballet?) were dead tight, but under-justified by the plot-line. Les Dennis’s Uncle Fester steals the show with his collusive asides to the audience and authentic portrayal of his character; he is fast becoming a national treasure.

The Junior Reviewer pointed out that there isn’t much of Thing (a handful of appearances), Cousin It is nowhere to be seen, the ensemble didn’t get to do much and he posed the question – if Gomez and Fester are brothers, why don’t they talk the same? As a pre-teen, he enjoyed the show and thought it was funny.

It is a shame that none of the songs are stand-alone, except maybe the Python-esque Death is Just Around the Corner, but maybe it isn’t that sort of musical, and it all hangs together pleasingly, using Latin and French musical themes to complement the storyline. Even when the plot gets cheesy, it’s a monterey jack rather than an over-processed Kraft slice and the jokes are well timed. The set and costumes (Diego Pitarch) are a delight in shades of aurora and dusk, indeed, the whole event is quite enough to satisfy anyone’s inner Goth. It’s an evening’s classy immersion into the uplifting fantasy world of America’s most endearing unweird family. Just be warned of the consequences of playing a game of Truth or Dare.