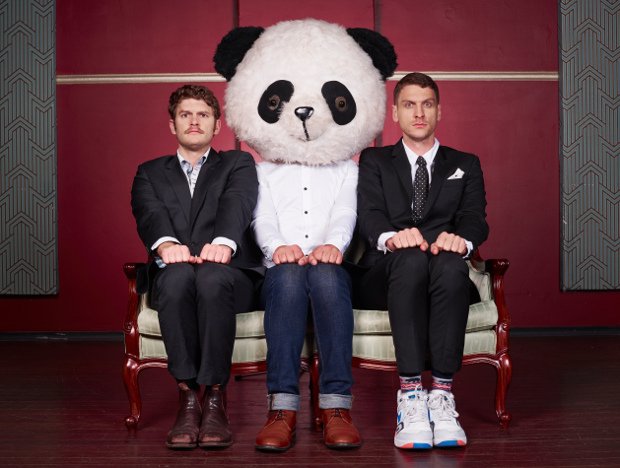 Unlike many long-form improv shows, there’s no prescribed theme or style to The Bear Pack. Instead, Steen Raskopoulos and Carlo Ritchie take the bare minimum of audience suggestions – a location, plus an object for “bonus points”, basically – and weave a far-fetched adventure story on the fly. They’re both excellent at this sort of improvisation, and confident enough in their partner’s ability as well as their own that they can (and do) throw curve-balls once in a while. When those pitches are invariably caught, resolved, and incorporated into the scene, it’s immensely satisfying. Each of the performers is happy to take the lead for long stretches, allowing their partner to take a back seat.

Raskopoulos and Ritchie are accompanied throughout the show by Ange Lavoipierre, who improvises a musical score to the story on the cello. Lavoipierre is a talented musician, and very attentive to the nuances of Raskopoulos’ and Ritchie’s drama. It helps them tremendously, and Lavoipierre is effectively a pace-setter for their marathon, running just ahead of them and ensuring that the story progresses at a maintainable pace. Occasionally, both Raskopoulos and Ritchie take advantage of the cello, allowing Lavoipierre to take centre stage for a moment while they give themselves a precious few seconds of thinking time.

When in doubt, they fall back on generic and recognisable tropes for both character and plot. That serves them well, but it can sometimes limit the range of scenes they present. One grizzled veteran briefing a young hotshot is much like the next. Perhaps inevitably with a troupe consisting of just two men, there aren’t many female characters in this story – just the one tonight, in fact, and a minor character at that. Thankfully, when she finally does appear, Raskopoulos plays her entirely straight: no Terry Jones-eque squawking-voiced harridans here.

There’s only one exit from the stage at Underbelly’s Belly Button, which sometimes necessitates some awkward squatting as Ritchie tries to signify that he’s “offstage” by hiding behind Lavoipierre. Those few moments of clumsiness aside, there’s some brilliant physical clowning on show: from Raskopoulos diving backwards into the ocean, to Ritchie trying to shuffle across the stage while remaining sat in a non-existent chair.

Raskopoulos and Ritchie present their characters as much through glances, gestures and expressions as they do through dialogue. It’s surprisingly subtle work for an improv show, and it’s all the stronger for it. The coda to the show is an excellent touch: any plot holes or unanswered questions from the main story are quickly addressed through a handful of very short improvised sketches. It forms an excellent epilogue to the story, and cleverly allows Raskopoulos and Ritchie to shore up any holes that may otherwise have been left.