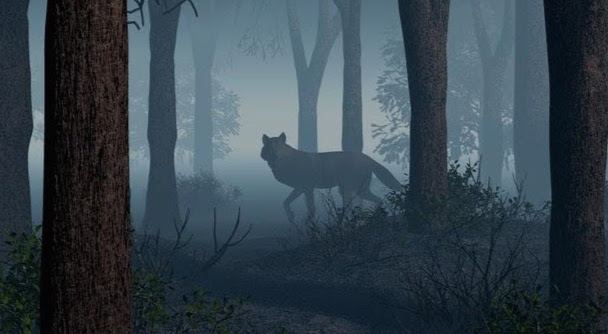 The Company of Wolves

Angela Carter, queen of re-imagining stories, would be pleased to know that one of her books has been adapted once again. St Mary’s Calne’s new theatre company Twisted Tales have brought a fresh version of The Bloody Chamber to the Fringe. Using elements from both the book and from Neil Jordan’s film The Company of Wolves, this new The Company of Wolves retains all the necessary gothic elements of the sexualised fairy tale.

The play visually is absolutely spot on. All dressed in reds, whites, and blacks, the ensemble clearly embody the original Red Riding Hood story. Snow White also shines through, another bloody fairy tale with a more dark edge than seen in mainstream tellings. The group have succeeded in evoking Carter’s point that whilst folktales function as cautionary tales, they also show a darker human impulse to stray from the path.

Holly Darling’s script is beautifully written. The narration comes alive in the rich descriptions of snow falling and of the everyday rural life. The play is full of innuendo for the audience to chuckle along with, and reflects Carter’s love for double-entendre. Darling has also taken the decision to make literal the correlation between men’s desires and the archetypical wolf. Werewolves are the villain in this retelling, which Carter surely would have approved of.

The wolf himself was great to watch. The actor is an incredibly charismatic performer and he inhabits all manner of predators (both man and beast) with great flair. No doubt we will see him return to the Fringe with more productions in the future. Rosaline, this play’s Red Riding Hood, is also a talented performer. At once wide-eyed and coy, she perfectly gets across the young girl’s naive innocence that masks a budding sexuality her grandmother finds frightening.

The ideas in this piece are not necessarily new, but are more a copy of what has already been covered in the book and film. The use of physical theatre to translate Carter’s story to the stage is however very creative, in particular the use of ballroom dance to perform one serial philanderer’s devastating escapades. By sticking to Carter’s formula, the group reinforce her belief that stories can be passed down through generations but look slightly different to each one.